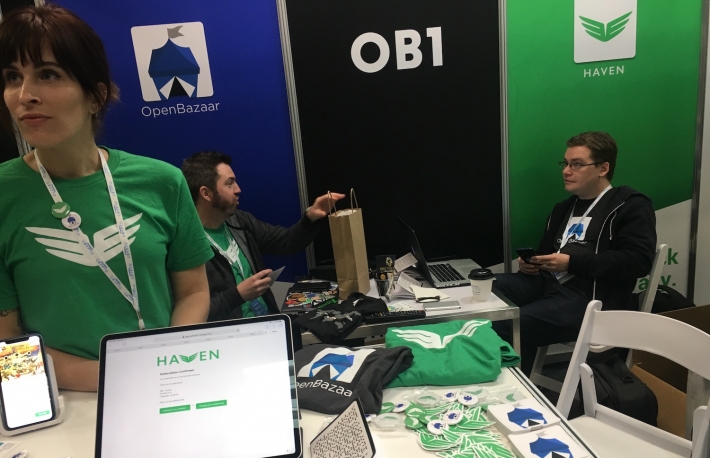 “We’ve been doing this for six years and it’s still very rough around the edges,” said Brian Hoffman, co-founder of OB1, maker of crypto marketplace app Haven and its desktop counterpart, OpenBazaar.

The Haven app has logged 30,000 downloads since launching in July 2019. Since there’s a fine line between open commerce and bitcoin-fueled black markets, Hoffman said compliance costs are a chief concern for his startup. Any seller can list any item using the open-source protocol, but only compliant offerings get picked up by OB1’s search engine.

“If we were taking a cut of every transaction … are we putting ourselves in a position where we’re a party in illicit activity?” Hoffman said, pondering how the firm’s business model might change in 2020. “We’re very neutral. The technology is just there. We wanted to do a different paradigm for the business.”

Although a variety of e-commerce trends are booming during the Great Lockdown, crypto payments remain exceedingly niche.

“We’ve seen about half a million dollars [spent] in the last three months for bitcoin, bitcoin cash, and litecoin. The majority is definitely bitcoin,” Hoffman said, whose startup earns money through affiliate marketing and a fraction of revenue from shops that use OB1 products.

Now compare that to marketplaces like Shopify, which also allows merchants to accept bitcoin but declined to comment for this story. The e-commerce platform reported $470 million in revenue during the first quarter of 2020, a 47% increase from the previous quarter. Even if we take OB1’s smaller scale into account, the crypto startup’s modest growth doesn’t appear to reflect the broader retail shift.

Merchant adoption among merchants and shoppers is far more comparable to the tiny community of daily active users of decentralized applications (dapps) in the gaming sector. In short, Bitcoin bulls who argue bitcoin is a better retail currency than Ethereum is a developer platform are speculating on future usage rather than current analysis.

Since the underlying software is more decentralized than marketplaces like Amazon, OB1 can’t charge all merchants. (That’s a feature, not a bug, considering how Etsy fees gouge smaller merchants. Regardless, Etsy usage is up and the company’s stock price tripled over the past three months.) OB1 laid off 12 employees earlier this year and is now a team of five.

“It protects your privacy while doing commerce; you can’t do that on Etsy. The information is on your device (for both sellers and buyers) and doesn’t go anywhere,” Hoffman said. “Now, after the layoffs, we have a refined focus on getting OB1 to be profitable moving forward.”

Sergio Abi-Naked and Dirk Abinakad, founders of the men’s accessories retailer Simply Carbon Fiber, said they started accepting bitcoin a few weeks ago, using the bitcoin payment processor OpenNode. So far no one has used bitcoin during the broader “increase in sales” sparked by the coronavirus crisis.

“I see the potential for it in the future, so we wanted to be prepared,” the retail founders, Abi-Naked and Dirk Abinaka, said about bitcoin. “We think this is where payments and e-commerce is going.”

Generally speaking, bitcoin usage continues to rise at a modest rate over the past year. According to a spokesperson for payment processor BitPay, volumes increased 10% in Q1 2020 compared to Q4 2019, primarily for computer products and services. This included an average of 98,000 transactions per month, according to the spokesperson.

“We saw a resurgence when eBay and Amazon were blocking mask sellers and stuff,” OB1’s Hoffman said. “Now we have new Chinese sellers trying to sell [medical] equipment.”

“More people want to fly privately,” Fragner said of the private jets. “We expect to see more payments in bitcoin.”

Among smaller businesses, risky merchants are the primary sector where bitcoin is slowly gaining traction.

“It’s a little bit harder for those companies to get banking relationships, even though it’s perfectly legal,” Landrom said of high-risk merchants.

Many OpenNode customers automatically convert bitcoin to fiat until they are ready to withdraw, she said, to avoid losing value in the meantime from volatility. They can withdraw their earnings in either bitcoin or fiat. Spurred by customer demands, Landrom said OpenNode is applying for a wide range of financial services licensing beyond money transmission.

“It could be payroll, paying suppliers or gaming winnings,” Landrom said of prospective payments tools coming to the backend merchant platform. “This supports [merchant] business operations. In some cases, they send us fiat and want us to pay out in bitcoin.”

However, she added, licensing is a slow and expensive process. It takes startups months to compliantly shift their strategy to offering the services users want.

Beyond bitcoin, there are plenty of experiments with natively digital shopping experiences. For example, ChromaWay co-founder Or Perelman said his startup is developing a VR shopping mall demo, where shoppers can use an integrated game wallet to purchase items with crypto in virtual stores. But it’s too soon to say whether people will actually use cryptocurrency this way.

Meanwhile, Facebook is doubling down on shopping features, potentially even with its newly rebranded crypto subsidiary, Novi.

“I think there are a lot of opportunities with Libra to make the process of commerce and payments helpful – a lot easier,” Facebook CEO Mark Zuckerberg said during the company’s shareholders’ call last month.

OB1’s Hoffman said that as of 2020, bitcoin commerce offers an “alternative” to marketplaces like Etsy, especially for small merchants. But the commerce sector of the bitcoin economy isn’t growing at the same pace as mainstream competitors offering corporate brands – even taking the smaller scale into account.

“We’re making tons of sales using OpenBazaar,” Hoffman said of the mask and appliance sellers OB1 itself operates. “But if [shoppers] want an iPhone, we’re not there yet.”