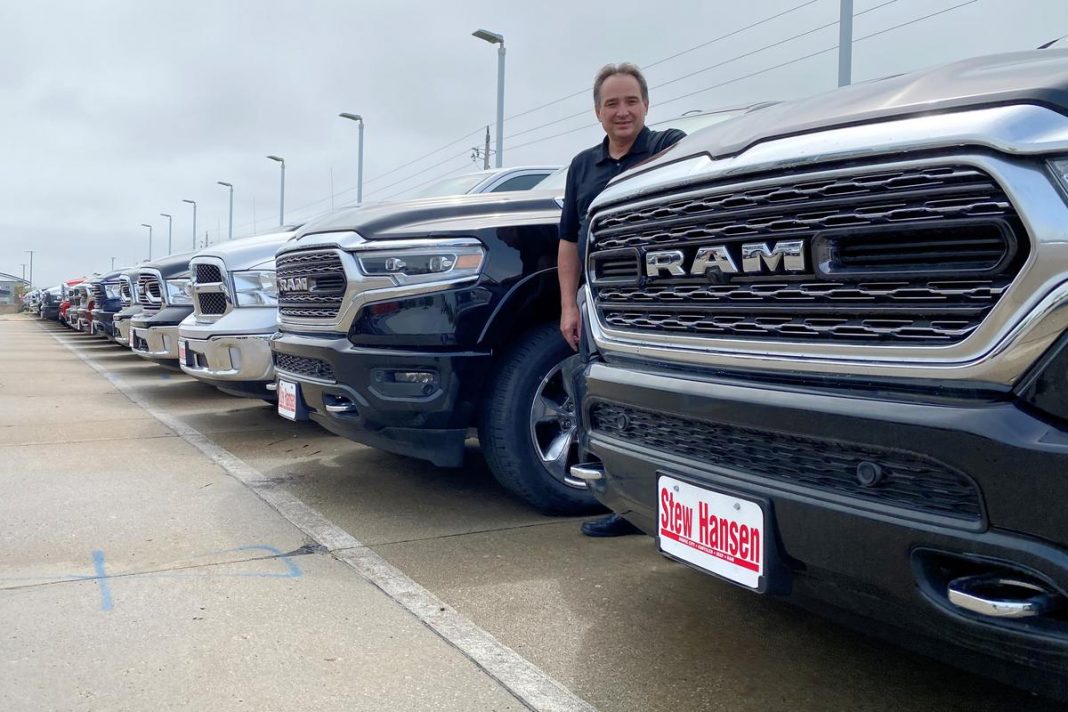 “Our biggest issue will be if we don’t get more inventory,” said Bill, general sales manager of Stew Hansen Chrysler Dodge Jeep Ram, which sells around 2,700 new vehicles a year in Urbandale, a suburb of Iowa’s capital Des Moines.

After a drop in sales in April when consumers stayed home, Bill expects pickup truck sales to end May similar to where they were a year earlier.

And if demand remains strong, Bill said he will run out of popular models in June. Fiat Chrysler Automobiles NV began slowly restarting Ram truck assembly lines on Monday after a two-month shutdown.

The U.S. economy contracted in the first quarter at its sharpest pace since the Great Recession of 2007-2009 because of lockdown measures aimed at slowing the spread of the coronavirus. Economists warn the second quarter will be much worse.

Pickup trucks are one of the most profitable automotive segments in the world. They account for a huge portion of the Detroit automakers’ profits and formed a huge lure for Peugeot S.A., which expects to merge with FCA by early 2021.

The pressure is now on to boost pickup truck production and send vehicles to dealers in parts of the country with dwindling supplies.

That is particularly true for GM, which is running short of certain truck models after losing 40 days of production to a strike last fall.

“If you don’t have what someone wants, they can choose to go to another brand,” said Cox Automotive analyst Michelle Krebs.

Detroit automakers in March rolled out large discounts – such as interest-free loans for seven years – to keep vehicles rolling off dealer lots.

“A lot of people that have two-year-old trucks can get into a new one for the same (monthly) payment or lower,” said Noah Wolter, general manager of Charles Gabus Ford in Des Moines, who sold around 1,500 new vehicles last year. “That’s the easiest swap ever.”

Demand for large pickups “is running incredibly strong,” Ford U.S. sales and marketing chief Mark LaNeve said. Large pickups accounted for 21% of all U.S. vehicle sales in April, up from an average monthly proportion of 13% to 14%.

At Stew Hansen in Urbandale, Jerry Bill said thanks to discounts, customers have been able to get a $55,000 Ram truck for $44,000. That has encouraged some to switch out of SUVs or cars into newer truck models kitted out more like luxury vehicles than the workhorse trucks of old.

Mike Koval, interim head of the Ram brand at FCA, said inventory of certain versions of its Ram trucks were “running a bit lean” but the automaker was focused on boosting inventories in states where dealers have stayed open throughout the coronavirus outbreak.

Carl Moyer, owner of Karl Chevrolet in Ankeny, Iowa – the second-largest Chevrolet dealer in America with sales of 4,000 new vehicles a year – said he started off the crisis heavy on inventory. That cushion is gone, he said.

Asked when he would start worrying about getting new trucks from GM to replenish his supply, Moyer said simply: “Today.”