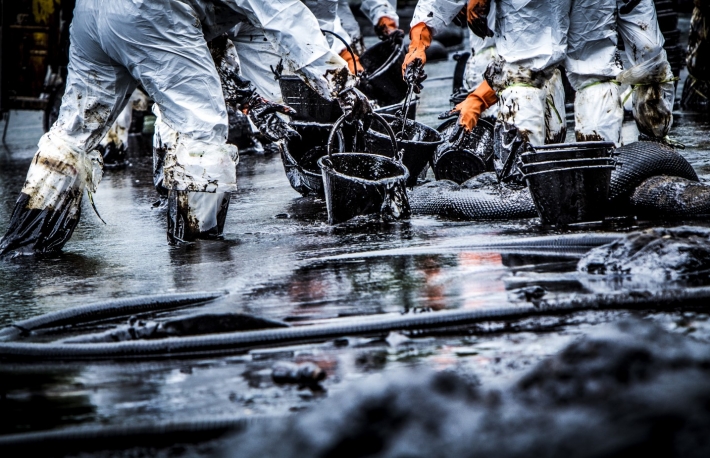 The top cryptocurrency by market value is changing hands near $6,820 at time of writing, having faced rejection above $7,200 yesterday., according to CoinDesk’s Bitcoin Price Index.

Bitcoin’s fall came as prices of oil, popularly known as “black gold,” tanked on oversupply fears. Notably, traders fled from the May futures contract on the West Texas Intermediate’s (WTI) crude, the main oil benchmark for North America, sending prices below zero for the first time on record.

The unprecedented sell-off has injected uncertainty into global financial markets. As a result, stocks dropped on Monday with the S&P 500 losing 1.8 percent of its value. The risk-off macro-environment has again strengthened bearish pressures for bitcoin.

“The downside in BTC is more likely attributable to losses in the equities market, which may be directly or indirectly affected by Crude prices, than the downward trend for crude directly,” said Matthew Dibb, co-founder of Stack.

Bitcoin has largely moved in tandem with the stock markets, in particular the S&P 500 index, from the beginning of the coronavirus pandemic in the last week of February.

The latest drop in bitcoin prices marks a failure by the bulls to keep gains above the widely tracked 100-week average at $7,054.

Bitcoin closed last week above the 100-week average, having repeatedly failed to do so in the preceding four weeks. As a result, some observers were expecting the upward momentum to gather pace. That didn’t happen, as noted.

The failed breakout is accompanied by a negative reading on the weekly chart’s money flow index – a sign that sellers have the upper hand right now.

The bearish technical setup is accompanied by continued sell-off in equities and oil. While WTI’s May futures contract, set to expire on Tuesday, has risen back above $1, the June contract is now facing increased selling pressure and is currently trading near $11.80, down 40 percent on the day.

Analysts at Goldman Sachs have warned that the plunge in black gold is symptomatic of unprecedented supplies. Put simply, oil is likely to continue taking a beating in the short-term.

Importantly, a cash crunch seems to be gripping the markets again, as is evident from the losses in traditional safe havens like gold, the Japanese yen and the Swiss franc – alongside a 0.5 percent uptick in the dollar index.

“[Bitcoin] may go down to $6,400,” Chris Thomas, head of digital assets at Swissquote Bank, told CoinDesk.

However, some observers are optimistic about bitcoin’s future prospects. “The [miner reward] halving should help keep a bid to bitcoin in the coming months,” Richard Rosenblum, co-head of trading at GSR, told CoinDesk.

Rosenblum added that bitcoin is a futuristic product that will ultimately benefit from the growing prevalence of technology in consumers’ everyday lives.

Meanwhile, Stack’s CEO Matthew Dibb thinks bitcoin and other major digital assets have largely remained “out of harm’s way” despite the oil crash. “While BTC is slightly down on today’s markets, we are not seeing any significant correlation between the market and energy commodities,” said Dibb, adding that he cryptocurrency will remain bullish as long as prices are holding above $5,800.

Supporting these arguments is the recent decline in the number of bitcoins held on exchanges, which suggests a shift to the long-term holding strategies.