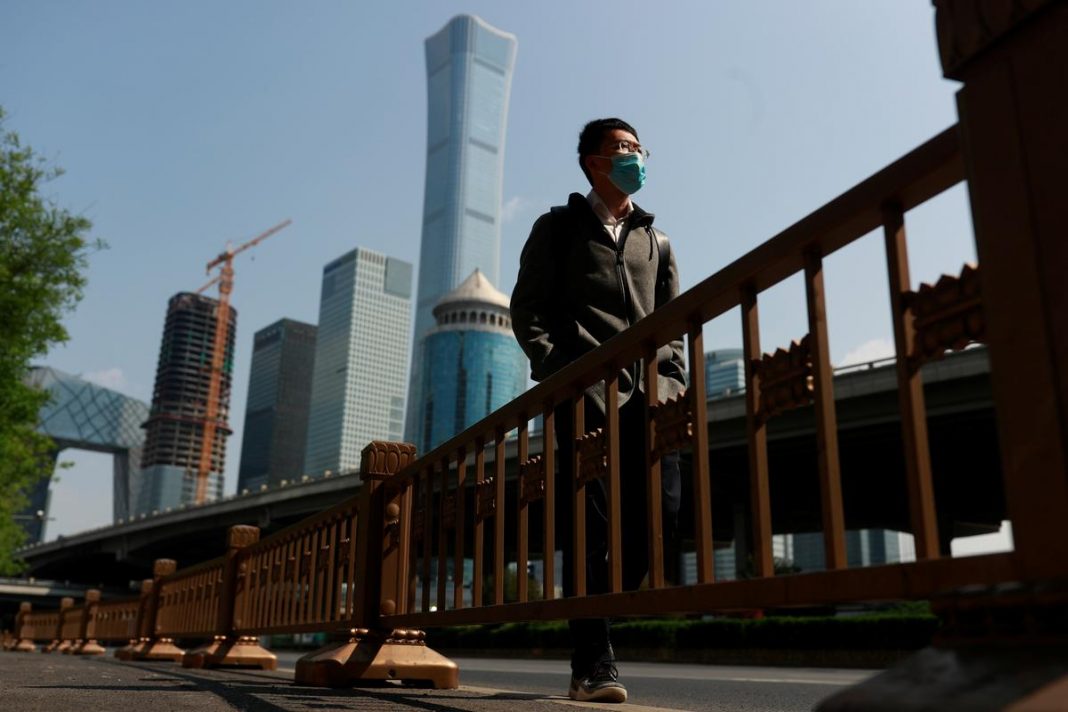 Gross domestic product (GDP) fell 6.8% in January-March year-on-year, official data showed on Friday, a slightly larger decline than the 6.5% forecast by analysts and reversing a 6% expansion in the fourth quarter of 2019.

It was the first contraction in the world’s second-largest economy since at least 1992, when official quarterly GDP records were first published.

Providing a silver lining was a much smaller-than-expected fall in factory production in March, suggesting tax and credit relief for virus-hit firms was helping restart parts of the economy shut down since February.

However, analysts say Beijing faces an uphill battle to revive growth and stop massive job losses as the global spread of the virus devastates demand from major trading partners and as local consumption slumps.

“First-quarter GDP data is still largely within expectations, reflecting the toll from the economic standstill when the whole society was on lockdown,” said Lu Zhengwei, Shanghai-based chief economist at Industrial Bank.

“Over the next phase, the lack of overall demand is of concern. Domestic demand has not fully recovered as consumption related to social gatherings is still banned while external demand is likely to be hammered as pandemic spreads.”

On a quarter-on-quarter basis, GDP fell 9.8% in the first three months of the year, the National Bureau of Statistics said, just off expectations for a 9.9% contraction, and compared with 1.5% growth in the previous quarter.

Statistics bureau spokesman Mao Shengyong told a press briefing after the data that China’s economic performance in the second-quarter is expected to be much better than in the first.

However, weaker domestic consumption, which has been the biggest growth driver, remains a concern, as incomes slow and the rest of the world falls into recession.

Per capita disposable income, after adjusting for inflation, fell 3.9% from a year earlier in the first quarter, the data showed.

“We are hesitant to think that this is just a one quarter event, Q2 will also likely be lower than expectation,” said Ben Luk, senior multi asset strategist at State Street Global Markets in Hong Kong.

“To offset weakness in external demand, we will see some policy support later this month or early May.”

Investors and policymakers worldwide are closely watching to see how long it takes China to recover from the virus shock, as the United States and a number of other afflicted countries begin to consider cautious reopenings of their economies.

“As long as there are strict social distancing measures, the recovery of activity will be very slow, and this will be reflected in consumption,” analysts at ING said in a note.

Economists’ forecasts for first-quarter GDP had ranged widely given the many uncertainties around the pandemic’s economic and social impact in China.

The virus has infected more than 2 million globally and killed more than 140,000. China, where the virus first emerged, has reported more than 3,000 deaths although new infections have dropped significantly from their peak.

Of major concern for policymakers is social stability among its 1.4 billion citizens, millions of whom migrate from rural areas to cities to find work each year.

The urban jobless rate fell to 5.9% in March from 6.2% in February, suggesting the pain in the labour market is yet to be reflected in official numbers.

However, analysts warn of nearly 30 million job losses this year due to stuttering work resumptions and plunging global demand, outpacing the more than 20 million layoffs seen during the 2008-09 financial crisis.

China’s stability-obsessed leaders have pledged more steps to combat the slump but are mindful of the lessons learned in 2008-09 when massive stimulus saddled the economy with mountains of debt.

“We expect Beijing to deliver a large stimulus package soon to combat the worst recession in decades, with most of the financing to be provided by the PBOC (People’s Bank of China),” Ting Lu, chief China economist at Nomura, said in a note.

The PBOC has already loosened monetary policy to help free up credit to the economy, but its easing so far has been less aggressive than during the financial crisis.

China has cut a number of key policy rates in recent months and is widely expected to lower its benchmark lending rate again on Monday at its monthly fixing. Regulators have also encouraged banks to offer cheap loans to the hardest-hit sectors and tolerate late loan repayments.

The government will also lean on more fiscal stimulus to spur infrastructure investment and consumption, which could push the 2020 budget deficit to a record high.

For 2020, China’s economic growth is expected to tumble to 2.5%, its slowest annual pace in nearly half a century, a Reuters poll showed this week.