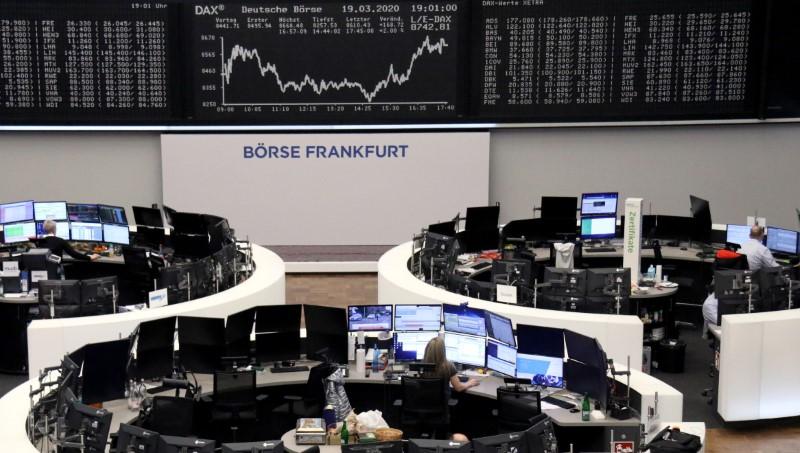 The European Commission said on Friday it was looking at loosening debt rules for member states and issuing common euro zone bonds in an attempt to shore up businesses and households crushed by the meltdown in economic activity.

The pan-European STOXX 600 index was up 4.3%, on course to erase the entire week’s declines, but still looking at its worst month in three decades as the deepening spread of the outbreak in Europe forces countries to shut down.

Even travel and leisure stocks .SXTP attempted a rebound in what has been their worst month so far since October 1987, as the promise of more stimulus raised hopes of a smoother recovery from the health crisis.

The optimism was reflected across global equity markets, as the U.S. Senate debated a $1 trillion-plus package that would include direct financial help for Americans. Meanwhile, sources told Reuters that China was set to unleash trillions of yuan of fiscal stimulus.

“It’s seemingly having a positive effect given the market needed a trillion-dollar worth of help this week to just make it to the weekend,” said Stephen Innes, a markets strategist at AxiCorp.

“(But it is) the calm before the storm, I’m afraid, as the nasty impact on corporate solvency will become more evident in the weeks ahead when the demand shock filters through to the real economy.”

Several blue-chip European firms have flagged a severe hit to business as the pandemic empties hotels and crushes consumer spending, with the airline industry facing a complete collapse in the face of halt in global travel.

British retailer Marks & Spencer (MKS.L) was the latest to warn about an impact in its clothing, homewares and international businesses, sending its shares down 5.2%.

Holiday Inn owner IHG (IHG.L) said demand for hotels was currently at the lowest levels it had ever seen and announced a series of measures to cut costs. But its shares, which had lost half their value since the virus emerged in Europe mid-February, were up 12.5% in early Friday trading.

Italian shares .FTMIB lagged other major stock markets as the death toll from COVID-19 in the country overtook that of China, the former epicenter of the virus outbreak.