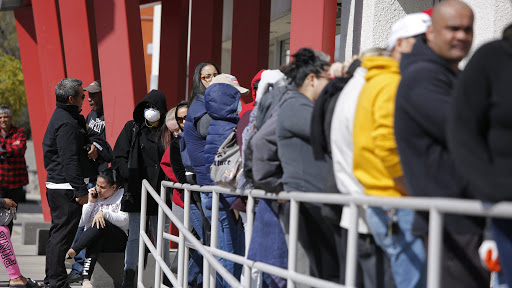 Next Thursday’s look at weekly new jobless claims may show a tenfold spike to two million as the full force of the coronavirus halt in the U.S. economy slams the labor market, economist Ian Shepherdson told CNBC.

Shepherdson’s comments came ahead of this Thursday’s release of the Labor Department’s weekly report jobless claims. The report showed claims rose to 281,000 last week, a significant rise from last week’s 211,000.

“Looking at the states’ unemployment claims numbers that have been coming out over the last few days, it looks to me like the order of magnitude in most states seems to be about 10 times higher than the normal weekly numbers before the crisis,” the chief economist at Pantheon Macroeconomics said on “Squawk Box.” “That means next week’s jobless claims number could jump 200,000-something this week to two million next week.”

In Ohio, for example, more than 48,000 people filed for jobless benefits in the first two days of the week, up from 1,825 the week prior. A similar story unfolded in Pennsylvania, where about 70,000 people applied for unemployment benefits on Tuesday alone. In the entire first week of March, the state received around 12,000.

Shepherdson said he hoped there would not be any further exponential jumps in claims after next Thursday’s numbers come out.

However, he said a jobless claims number of around two million could increase the sense of urgency in Washington, leading to more significant economic relief packages.

The U.S. job market, like the overall economy, was good shape before the crisis. The nation’s unemployment rate in February, before the most serious impact from the outbreak began to unfold, was 3.5%, matching a roughly 50-year low. The country added 273,000 jobs last month.

Renewables could displace fossil fuels to power the world by 2050,...