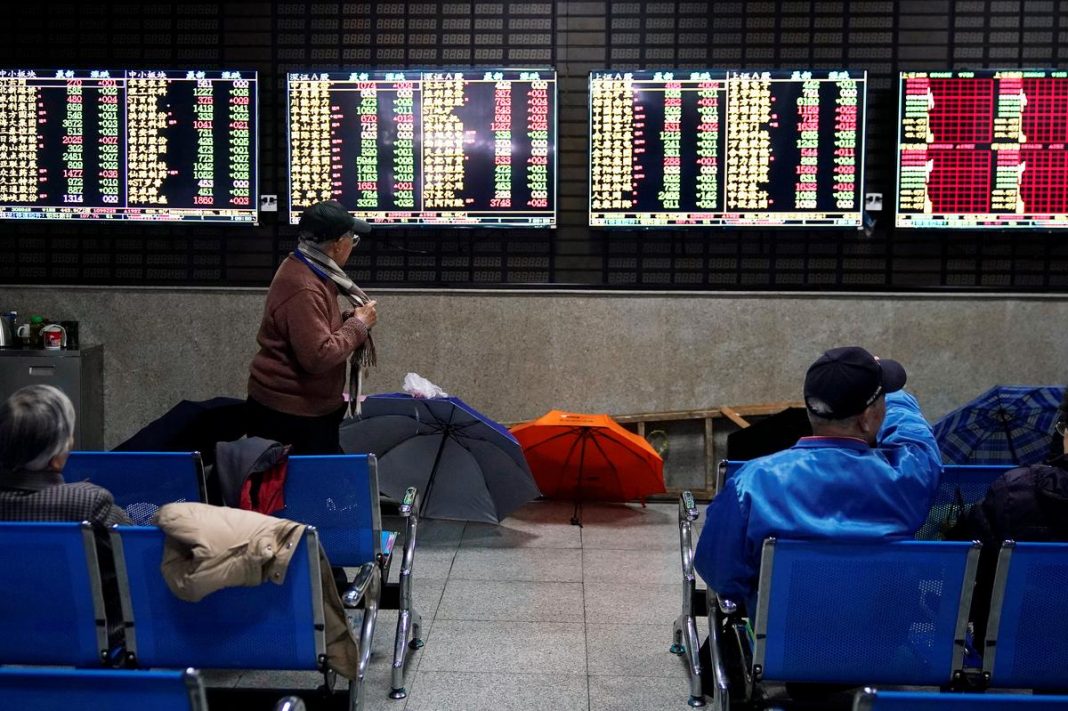 Adding to the tension was the imminent release of flash manufacturing surveys for a range of countries. Japan’s index dropped to 47.6 in February, from 48.8, marking the steepest contraction in seven years.

Corporate earnings are increasingly under threat as U.S. manufacturers, like many others, scramble for alternative sources as China’s supply chains seize up.

The International Air Transport Association (IATA) estimated losses for Asian airlines alone could amount to almost $28 billion this year, with most of that in China.

“COVID-19 anxiety has risen to a new level amid concerns of virus outbreaks in Beijing and outside of China,” said Rodrigo Catril, a senior FX strategist at NAB.

“U.S. and EU equity markets have been sold across the board with core global yields benefiting from safe-haven flows,” he added. “Asian currencies have suffered sharp falls, including the yen as recession fears trump the usual safe-haven demand.”

Equities lagged badly, with MSCI’s broadest index of Asia-Pacific shares outside Japan .MIAPJ0000PUS off 0.6% on Friday in nervous trade.

South Korea .KS11 slid 1.2% as the virus spread in the country, while Japan’s Nikkei .N225 went flat even as a plunge in the yen promised to aid exporters.

Shanghai blue chips .CSI300 were holding their nerve thanks to the promise of more policy stimulus at home. But both E-Mini futures for the S&P 500 ESc1 and EUROSTOXX 50 STXEc1 slipped 0.3%.

Sovereign bonds benefited from the mounting risk aversion, with yields on 30-year U.S. Treasuries US30YT=RR falling below the psychologically important 2% level to the lowest since September 2019.

“Treasuries attract foreign bond inflows because of their higher yields, and because higher yields leave more scope for yields to decline.”

Those flows were a boon to the U.S. dollar, boosting it to multi-month peaks against a raft of competitors this week.

The most spectacular gains came on the Japanese yen as a run of dire domestic data stirred talk of recession there and ended months of stalemate in the market.

The dollar was last lording it at 112.02 yen JPY= and set for its best week since September 2017 with a rise of 2%. Another casualty of its close trade ties with China was the Australian dollar, which plumbed 11-years lows AUD=D3.

Against a basket of currencies, the dollar hit a three-year top at 99.910 .DXY having climbed 0.8% for the week so far.

Analysts at RBC Capital Markets noted the dollar’s outperformance had brought it close to breaching a host of major chart barriers, which could supercharge its rally.

“This has allowed the DXY to approach the 100.00 threshold – with a key resistance hurdle at 100.30 now within sight,” they wrote in a note. The same went for the Chinese yuan CNH=.

“USD/CNH is now poised to pierce resistance at 7.0559 after the USD hit new cycle highs against other EM currencies.”

Oil prices faded a little on Friday, but were still up more than 3% for the week.