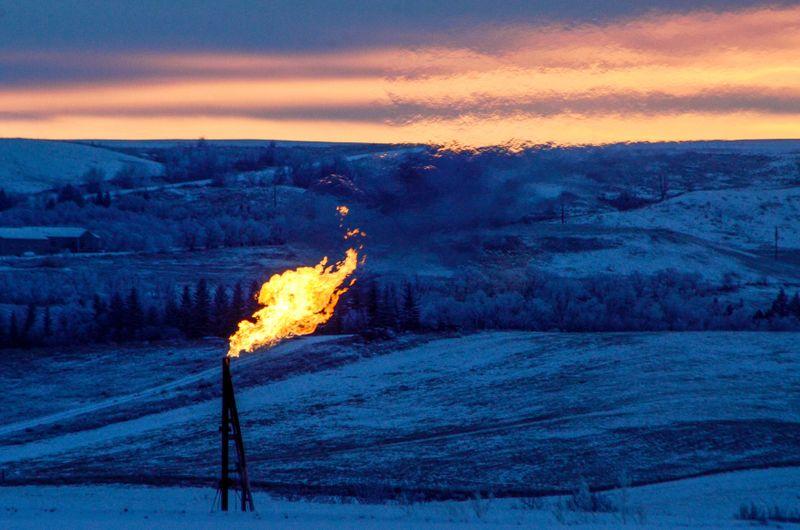 Flaring, or deliberately burning gas produced as a byproduct to oil, can worsen climate change by releasing carbon dioxide. Venting releases unburned methane, which is many times more potent than carbon dioxide as a greenhouse gas. Oil drillers tend to flare or vent gas when they lack pipelines to move it to market, or prices are too low to make transporting it worthwhile.

“You’ve got a real waste issue,” said Colin Leyden, a policy advocate for the Environmental Defense Fund, which tracks flaring. “And everyone should be concerned about that.”

In the Permian Basin underlying Texas and New Mexico, the largest U.S. shale basin, flaring and venting totaled about 293.2 billion cubic feet last year, according to state regulatory data compiled by independent energy researcher Rystad – up about 7% from 2018. In North Dakota’s huge Bakken oil field, meanwhile, the volume was just over 200 Bcf, up 36% from 2018, Rystad said.

Combined, that would put volumes of flared and vented gas from America’s two biggest oil fields at 493.2 Bcf, more than 5% above the national 2018 total of 468.3 Bcf reported by the U.S. government’s Energy Information Administration (EIA).

That volume of gas, if released directly to the atmosphere, would have the climate impact of about seven coal-fired power plants, according to the Environmental Protection Agency’s Greenhouse Gas Equivalencies Calculator.

Texas, New Mexico, and North Dakota led a 66% nationwide increase in flaring and venting in 2018, and represented 90% of the national total that year, according to the EIA. The agency will not release its 2019 flaring and venting estimates until late this year.

U.S. oil production has surged for a decade as improved technology allowed drillers to tap reserves previously impossible to access. The Trump administration has also rolled back environmental regulations, including moving to rescind Obama-era limits on drilling-industry methane emissions.

States have regulations to limit flaring, but have been reluctant to crack down on violators.

Since 2018, for example, North Dakota’s drilling industry has incurred no penalties or fines even as it consistently missed monthly regulatory targets to capture 85% or more of its gas, according to state regulators. Between April 2018 and November 2019, monthly flaring levels ranged between 16% and 24%, according to state data.

Katie Haarsager, a spokeswoman for North Dakota’s oil and gas regulator, said it would take $18 billion in investment for North Dakota to meet its gas capture needs as production is forecast to grow for another two decades.

Texas regularly allows companies to burn or vent gas in excess of regulations. It has issued more than 35,000 flaring permits since 2013 and has not denied any, according to the state oil and gas regulator, the Railroad Commission of Texas.

“The obvious lesson… is it’s important to have regulation, but how those regulations are enforced is just as important,” said Andrew Logan, senior director of oil and gas at Ceres, a research and advocacy group focused on sustainability.

A study by the Environmental Defense Fund showed small private drillers, like Steward Energy and Surge Operating, tend to flare the largest percentages of gas they produce in the Permian, while bigger, publicly traded companies like Chevron Corp, Exxon Mobil’s XTO, and Apache Corp tend to flare or vent much less.

A spokesman for Surge said its flaring volumes had been high lately due to a temporary logistical glitch, and that it was committed to reducing flaring volumes in the future. Officials at Steward did not respond to a request for comment.

“There is broad agreement that more can be done to reduce flaring,” said Reid Porter, spokesman for the American Petroleum Institute, which represents the biggest U.S. oil and gas drillers, adding that new pipelines being planned are the “best steps forward to continue environmental progress.”