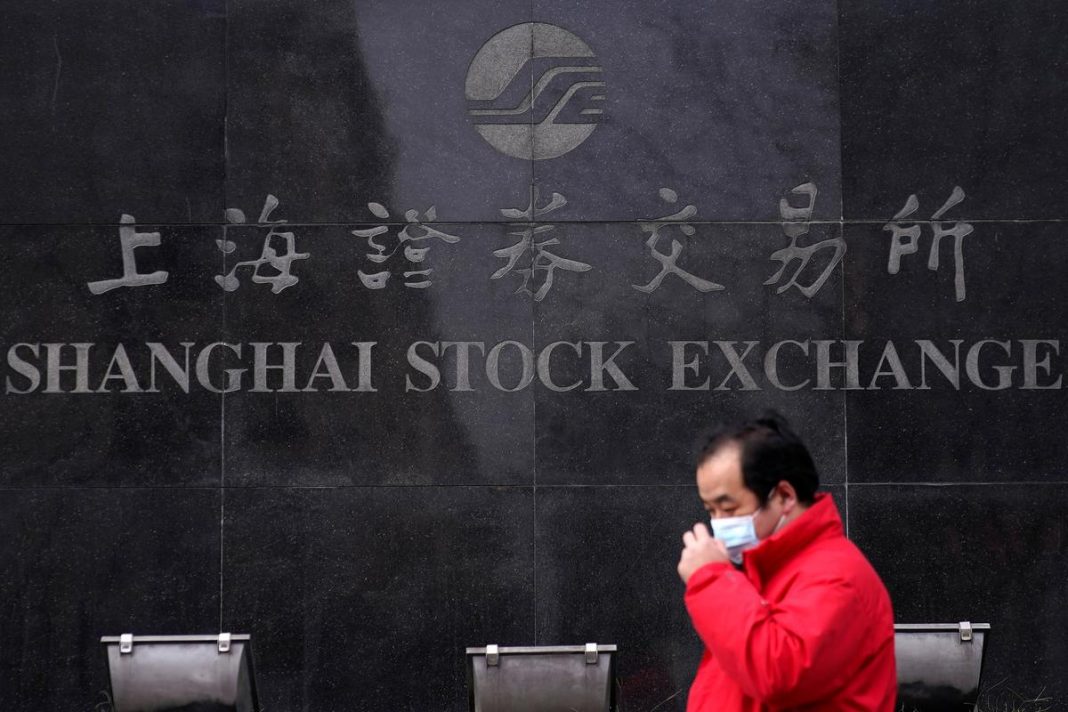 A nearly 8% plunge on the Shanghai composite index was its biggest daily fall in more than four years. The Chinese yuan blew past the 7-per-dollar mark and Shanghai-traded commodities from palm oil to copper hit their maximum down limits.

The wipeout came even as the central bank made its biggest cash injection to the financial system since 2004 and despite apparent regulatory moves to curb selling.

The total number of deaths in China from the coronavirus rose to 361 by Sunday, compared with 17 on Jan. 23, when Chinese markets last traded.

“You wanted to know what a real decoupling from China might look like, or what a ‘What if everyone just stayed at home and didn’t buy anything?’ economic thought-experiment looks like? Well here you are, folks,” Rabobank strategist Michael Every said in an afternoon note.

The yuan began onshore trade at its weakest this year and was down 1.2% by the afternoon, sliding past the symbolic 7-per-dollar level CNY=CFXS to close at 7.0257. [MKTS/GLOB]

The new virus has created alarm because it is spreading quickly, much about it is unknown, and authorities’ drastic response is likely to drag on economic growth.

“This will last for some time,” said Iris Pang, Greater China economst at ING.

“It’s uncertain whether factory workers, or how many of them, will return,” she said. “We haven’t yet seen corporate earnings since the (spread of the) coronavirus. Restaurants and retailers may have very little sales.”

Copper SCFcv1 sank to its lowest in more than three years, falling by its daily limit of 7%, while aluminum SAFcv1, zinc SZNcv1 and lead SPBcv1 shed more than 4% and soybeans DSAcv1 dropped 2%. [MET/L]

The People’s Bank of China (PBOC) said the stocks plunge had irrational or even panic elements, triggered by herd behavior, in a newspaper commentary published after markets closed.

The sell-off cast a pall over Asia, though losses were contained because a slide had been expected. Hong Kong’s Hang Seng .HSI, which shed almost 10% in two weeks, closed 0.2% firmer.

Amid the selldown, the PBOC had injected 1.2 trillion yuan ($173.81 billion) into money markets through reverse bond repurchase agreements, the largest such move since 2004, according to DBS analysts.

It also unexpectedly cut the interest rate on those short-term funding facilities by 10 basis points.

The chance of a benchmark lending rate cut on Feb. 20, the date of its next monthly fixing, has significantly increased, central bank adviser Ma Jun said.

“It is a clear message that they want to take growth-supportive measures and keep the market reassured,” Mayank Mishra, a macro strategist at Standard Chartered Bank in Singapore, said of the PBOC move.

“They are managing the situation well. The timing of the repo rate cut came a little quicker than some people were expecting, but they wanted to send a clear message.”

Cities like Wuhan, where the virus originated, remain in virtual lockdown and China faces mounting international isolation. Analysts are beginning to suspect the impact will be greater than the hit from the Severe Acute Respiratory Syndrome (SARS) outbreak in 2002-2003.

That pounded growth across Asia, especially in Hong Kong, and sent the Hang Seng index down by 18% over four months.

Though it quickly rebounded then, China’s share of the global economy has grown fourfold since and, with so many unknowns, few are willing to call a bottom just yet.

“At this point, we don’t see this as a buying opportunity,” said Invesco’s David Chao, a global market strategist for Asia ex-Japan. “We are in the midst of the escalation period.”