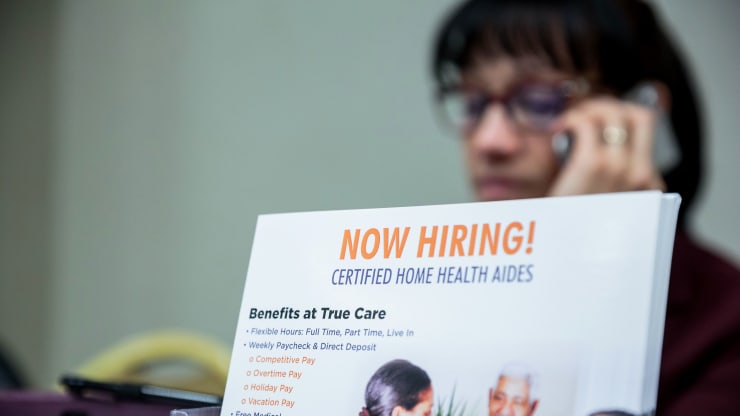 The number of Americans filing for unemployment benefits increased less than expected last week, suggesting the labor market continues to tighten even as job growth is slowing.

Initial claims for state unemployment benefits rose 6,000 to a seasonally adjusted 211,000 for the week ended Jan. 18, the Labor Department said on Thursday. Claims had declined for five straight weeks, resulting in the unwinding of the surge seen in early December, which was blamed on a later-than-normal Thanksgiving Day.

Claims data for the prior week was revised to show 1,000 more applications received than previously reported. Economists polled by Reuters had forecast claims increasing to 215,000 in the latest week.

The four-week moving average of initial claims, considered a better measure of labor market trends as it irons out week-to-week volatility, fell 3,250 to 213,250 last week, the lowest level since September.

Last week’s claims data covered the period during which the government surveyed business establishments for the nonfarm payrolls portion of January’s employment report.

The four-week moving average of claims dropped 12,500 between the December and January survey periods, suggesting some pickup in job growth this month.

The economy created 145,000 jobs last month after adding a massive 256,000 positions in November. The slowdown in job growth has been blamed on a shortage of workers amid the longest economic expansion on record, now in its 11th year.

Trade tensions have also weighed on manufacturing, leading to job losses at factories. Despite the low level of claims, the data have been showing layoffs in manufacturing, as well as transportation and warehousing, construction, educational service and accommodation and food services industries from late 2019 through mid-January.

That appears to fit in with the Federal Reserve’s Beige Book, which last week showed “most districts cited widespread labor shortages as a factor constraining job growth,” and “a number of districts reported job cuts or reduced hiring among manufacturers,” as well as “scattered reports of job cuts in the transportation and energy sectors,” in the tail end of 2019.

Despite the moderation in job gains, the labor market remains on solid footing, with the unemployment rate holding near a 50-year low of 3.5% in December and a measure of labor market slack dropping to an all-time low of 6.7%.

Thursday’s claims report also showed the number of people receiving benefits after an initial week of aid dropped 37,000 to 1.73 million for the week ended Jan. 11. The so-called continuing claims had surged to 1.80 million at the end of 2019, which was the highest level since April 2018. The jump was blamed on year-end volatility.

The four-week moving average of the so-called continuing claims increased 2,000 to 1.76 million in the most recent week.

World on the brink of ‘catastrophic moral failure’ due to unfair...