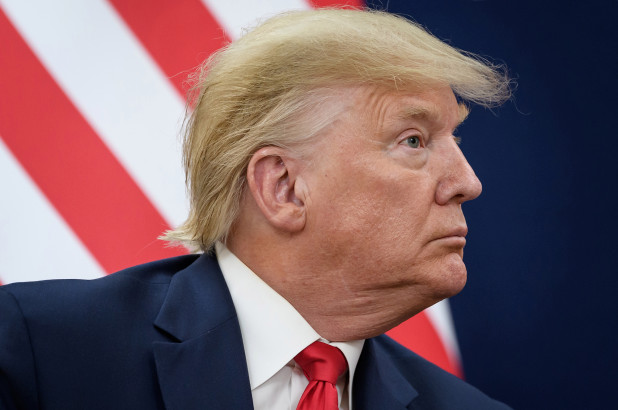 Long before Democrats finished making their marathon impeachment case Friday night, momentum had deserted them. The loops of repetition had gone from annoying to unbearable and the wild assertions got even wilder as their talk, talk, talk became a trial of its own.

Despite the historic nature of the event, the public voted by staying away. Many gallery seats sat empty, a fact that recalls a gem from the late Yogi Berra that “If the people don’t want to come out to the ballpark, nobody’s gonna stop them.”

Still, even a fraudulent impeachment is not a laughing matter and until the Senate votes, nothing is guaranteed. To that end, President Trump’s team finally got their first turn at bat Saturday and delivered several big hits in a strong start.

They began with something Trump has said repeatedly, including to me when I interviewed him Jan. 7: “Read the transcript and you’ll see exactly what it is.”

Pat Cipollone, the White House counsel, echoed that view when he told senators the transcript of the president’s call with the president of Ukraine on July 25th “is the best evidence” that Trump “did absolutely nothing wrong.”

He cited passage after passage in the transcript that undercut the Dems’ charge of a quid pro quo involving American military aid in exchange for investigations into Ukraine’s role in the 2016 presidential election and Hunter Biden’s lucrative gig with a corrupt energy company.

After reading each passage, including those on the need to combat corruption in Ukraine and the presidents’ agreement that Germany and France should pony up more aid, Cipollone noted that Dems did not mention any of those in their presentation. He accused them of hiding evidence that didn’t fit their “predetermined outcome” and of trying to pull off “the most massive interference in election history.”

He returned to that point in his team’s final remarks, saying this impeachment amounts to interfering in this year’s election “by removing the President of the United States from the ballot.”

Doing that, he said, is the true “abuse of power” that violates the Founders’ intent.

It was a clear argument and Cipollone was followed by three more Trump lawyers who stuck to his theme — go on offense and put the motive and conduct of the impeachers on trial.

The aim wasn’t just to create reasonable doubt. The goal was to demolish the entire case against the president and expose lead prosecutor Rep. Adam Schiff and Speaker Nancy Pelosi as pure partisans trying to overturn the 2016 election and steal the next one.

Some of the defense’s effort involved a meticulous reading of witness transcripts and comparing them to what Dems had said about those witnesses. And some of it was a much more casual effort at drawing contrasts. One of those contrasts simply involved time.

Saturday’s session lasted just two hours, yet it was effective in part because it was concise. The fact that the president’s team would be brief in their first at-bat and not use the full 24 hours allotted them in coming days clearly was aimed at reminding the senators and the viewing public of how Dems erred in making the trial a test of endurance.

Another contrast was that the president’s team would not insult the senators. Cipollone cited two Dem examples, the first with Rep. Jerry Nadler’s foolish charge that a vote against additional witnesses would amount to a “cover-up” of crimes and a “treacherous” decision.

The second insult was Schiff’s reference to a threat allegedly made by the White House that any defecting GOP senator would find that “your head will be on a pike.”

It’s telling that while Schiff said he wasn’t sure the CBS story was true, he used it anyway, which forced the White House and senators to deny it. “I know of no Republican senator who has been threatened in any way by anyone in the administration,” said Susan Collins of Maine, whose vote might be in play. Another, Sen. Lisa Murkowski of Alaska, said Schiff “lost me” with the comment.

To fair-minded, reasonable people, these incidents show Dems digging themselves a hole with the very people whose votes they need. That’s true, but it’s not the whole story.

A better way to understand what they’re up to involves looking back at the vicious attacks on Brett Kavanaugh at his Supreme Court confirmation hearings. The reprehensible smears, based on false accusations of sexual misconduct going back decades, were instantly embraced by every Democrat on the Senate judiciary committee, along with Minority Leader Sen. Chuck Schumer.

Kavanaugh was narrowly confirmed in October of 2018, so the battle was lost. But not the war.

In the midterm elections just a month later, Dems picked up seven governors’ seats previously held by Republicans without losing a single one they had held.

Most important, of course, they flipped the House to take control, with many of their new seats in districts Trump won in the 2016 election.

In short, Dems were rewarded for their resistance against Trump and their smears of Kavanaugh. That is the lesson they learned, and it’s why they are again carrying out another scorched-earth attack on Trump and the GOP.

This time, their voters and donors demanded impeachment. After Robert Mueller failed to deliver the goods, they immediately seized on the Ukraine call.

So while impeachment deserves to die in the Senate and almost certainly will, it is not in the Dems’ political interest to let it die ­quietly.

Buckle up for stormy days.

The outrage is ours, not yours, Blas

Slow walking and soft pedaling — that’s what Mayor Bill de Blasio is doing about violence at a Queens middle school.

More than a week after race-baiting Chancellor Richard Carranza bolted from a meeting with irate parents of MS 158 Marie Curie in Bayside, de Blasio finally had something to say.

“I would be outraged, too, as a parent, so the chancellor is looking to see . . . if changes are needed,” de Blasio said.

There’s no “if” about the need for changes. A videotape shows one student getting a brutal beating and parents say there was also a classroom sexual assault.

That would be news to parents who say discipline at the school has collapsed and that none of the perpetrators was suspended.

Carranza, of course, would rather count racial beans and end “white privilege.”

Ending violence and classroom chaos — that’s beneath him.

‘Woke’ to acronym acrobatics at NYT

He writes: “Those everywhere who are woke and those who work at Wokestan are part of the We Obviously Know Everything crowd.”