Home Economy Debt-distressed countries will not be saved by the IMF’s $650 billion currency... 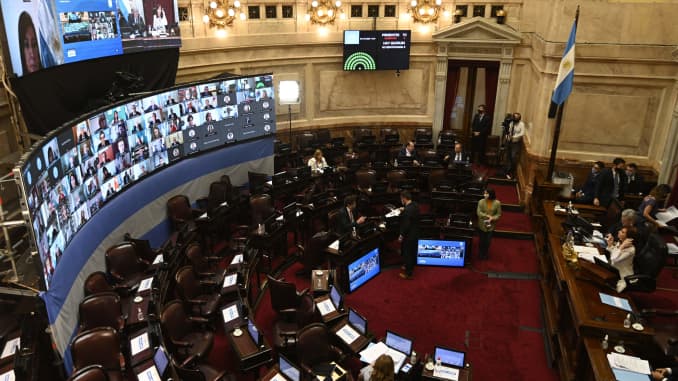 The International Monetary Fund looks set to issue $650 billion in currency aid to countries hit hard by the coronavirus pandemic, but those with unsustainable debt burdens may struggle to reap the rewards.

Treasury Secretary Janet Yellen indicated last week that the U.S. is on board with the allocation of Special Drawing Rights (SDRs), which are reserve assets that countries can use to supplement their foreign exchange assets, such as gold and U.S. dollars.

On Wednesday, the G-20 (group of Twenty) major industrial nations issued a joint statement supporting the proposal, which will now need approval from the IMF’s Board.

IMF Managing Director Kristalina Georgieva said following a discussion among the 190-member Fund’s executives in March that the proposed SDR allocation would “add a substantial, direct liquidity boost to countries, without adding to debt burdens.”

“It would also free up badly needed resources for member countries to help fight the pandemic, including to support vaccination programs and other urgent measures,” she added.

SDRs are typically allocated according to member countries’ IMF quotas, which are often based on the size of GDP. This has led to criticism that developed economies and wealthier emerging markets receive a larger share of allocations.

But in relative terms, the poorest and most heavily-indebted emerging economies will receive the greatest boost in gross international reserves as a result of this SDR allocation, according to Capital Economics Chief Emerging Markets Economist William Jackson.

“A $650bn allocation would more than double Zambia’s gross international reserves and it would raise reserves by more than 10% in Argentina, Ethiopia, Ecuador, Kenya, Ghana and Sri Lanka, all of whom face very high borrowing costs on global capital markets,” Jackson said in a research note Wednesday. By contrast, he highlighted, China’s gross international reserves would rise by just 1%.

Jackson noted that the increase in reserves would free up central banks to offer foreign currency liquidity to citizens, allowing for a rise in imports and helping to finance external debt repayments. This would pave the way for a stronger resurgence in demand and offer a “cushion” as external financing conditions are tightened, according to Jackson.

No solutions for unsustainable debt burdens

Smaller frontier markets such as Kenya and Ghana that still endure particularly high foreign borrowing costs would experience welcome relief, Jackson said, but he argued that member countries would generally have benefited more had the IMF taken this action at the height of financial market distress last year.

A second point he emphasized was that the increase in foreign currency liquidity “won’t prevent the need for debt restructuring in countries where debt trajectories are on unsustainable paths.”

Two such countries would be Argentina and Ethiopia. In a joint statement during the Spring Meetings on Wednesday, Argentina and Mexico argued that middle income countries should have greater access to SDRs, and proposed the creation of new mechanisms within the international institutions offering orderly debt restructuring for such nations.

In late March, Argentinian Vice President Cristina Fernandez de Kirchner reportedly said the country will not be able to pay back its $45 billion in debt to the IMF, having already defaulted on its debt three times this century.

Ethiopia has sought to make use of the G-20 Common Framework for Debt Treatments beyond the Debt Service Suspension Initiative (DSSI). The Common Framework is an agreement of the G-20 and Paris Club countries to organize and coordinate debt treatments for up to 73 low income countries that are eligible for the DSSI, and aims to assist with significant debt restructuring to restore sustainability.

Ethiopia’s application to utilize the Common Framework prompted Fitch to downgrade its sovereign credit rating to CCC from B in February, noting that the move “explicitly raises the risk of a default event.”