Home Opinions Georgia Republicans have no choice — they must vote in Senate runoff:... 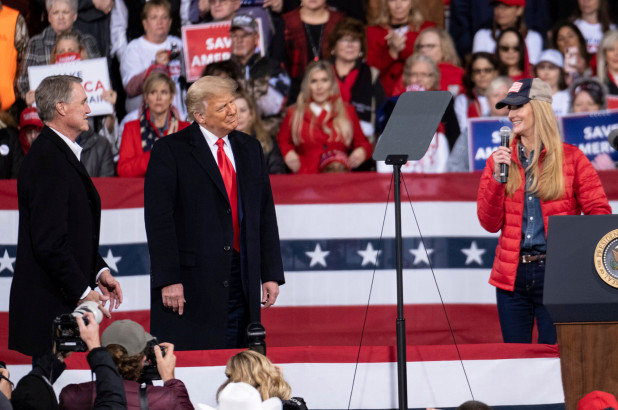 Disunity is death in politics, so why are Republicans in Georgia ripping each other apart just four weeks before two crucial Senate runoffs which will determine whether radical leftists remake this nation?

The answer goes deep into the struggle between the Trump movement’s conservative populism and the establishment GOP which it rejects.

Georgia is a microcosm of that struggle, now in the spotlight because of the unique circumstances of its Senate runoffs Jan. 5.

The outcome of those runoffs will determine whether Republicans hold the Senate and are able to check the worst tendencies of a future Biden administration, which include packing the Supreme Court, abolishing the Electoral College and adding two new states in order to entrench one-party rule.

Georgia’s courtly Republican governor, Brian Kemp, and the two GOP senators in the runoffs, Kelly Loeffler and David Perdue, are typical of a wealthy neoconservative establishment that benignly presided over American decline in past decades.

The seeds of today’s trouble lie in Kemp’s refusal to agree to President Trump’s request last year to appoint firebrand Doug Collins, a member of the House Judiciary Committee, to a vacant Georgia Senate seat.

Instead, Kemp appointed wealthy GOP donor Loeffler, despite the fact that Trump’s support for him in the 2018 gubernatorial race against Stacey Abrams was crucial to his narrow win.

Loeffler’s appointment was opposed by many conservatives and pro-life Republicans at the time. Concerned Women for America issued a statement in November describing her as the “wrong choice for Georgia” because she sat on the board of a hospital that is a top abortion provider and co-owned a basketball team that supported Planned Parenthood and the NBA’s China kow-tow.

The result of the bad blood was that Collins ran anyway in the special election Nov. 3, and the Republican vote was split.

Race-baiting radical the Rev. Raphael Warnock, who once said “America needs to repent for its worship of whiteness” became the Democratic nominee with 32.9 percent.

Loeffler thus joined Perdue in the double runoff next month, since neither won a majority of votes in their respective races.

Warnock should be unelectable in the purple state, but polls show Loeffler is up to seven points behind him, while Perdue is neck-and-neck against Beto O’Rorke-style Democrat John Ossoff.

This is the exquisite agony for Trump voters in Georgia. Do they hold their noses Jan. 5 and reward the people who stand for so much that Trump’s presidency repudiated? Or do they cut off their noses to spite their faces? Do they stay home, thus rewarding the very Democrats many believe stole the last election and plunging America into a fresh hell?

Trump flew into this maelstrom Saturday night to appear at a packed rally in southern Georgia.

And somehow, the consummate showman managed to pull off the mean feat of simultaneously urging his base to get out and vote in the all-important Senate runoffs while slamming the state’s election process as fraudulent.

While vowing never to “surrender,” he rebranded Loeffler and Perdue as part of the MAGA family.

“There is nobody that fought harder for me” he said of Loeffler. “She was so tough and smart. She even went against Mitt Romney.”

Perdue was “my friend [and] one of the toughest fighters for our America First agenda in Washington … a tremendous leader on pro-American immigration reform.”

There is no other choice for voters in Georgia. They hold the fate of the country in their hands. They must vote for Republican control of the Senate. Nothing else matters.

As Trump said Saturday: “if these two don’t get in… [Democrats] will terminate religious liberty, cancel free speech, and force you to fund extreme late-term abortion. And there will be nothing to stop them … You have no idea how bad it will be.”

The president has every right to challenge the Nov 3. election results and his demands for voter ID will be crucial to public faith in future elections.

Election integrity will be the final gift to America from the first Trump presidency. But as lawsuits lodged by the Trump campaign and allies failed in six states on Friday alone, it’s not fair to give his followers false hope.

Politics is the art of the possible and overturning the presidential election increasingly is impossible.

Frankly, you can’t underestimate the damage done to Republican prospects in the Georgia runoffs by the farcical allegations pushed by freelancing Trump-supporting lawyers Sidney Powell and Lin Wood. It’s painful to say so because both have done good in the past.

Powell’s claims that communists, Venezuelans, George Soros, Hillary Clinton, Kemp and now China were involved in a plot by the voting-software company Dominion to switch millions of votes from Trump to Biden have overshadowed more credible allegations of malfeasance such as the banishing of Republican poll watchers from vote counting places.

For weeks Powell has been promising to “release the Kraken” — bombshell evidence of this conspiracy — but so far all she’s produced is a damp squib.

The Dominion plot is straight out of the files of the anonymous stirrer Qanon, whose ability to turn Republicans on each other makes you suspect whoever it is must be a leftist operative.

Then there are Wood’s extraordinary attacks on Loeffler and Perdue at a “Stop the Steal rally” last week.

“They’ve got to demand publicly, repeatedly, consistently, ‘Brian Kemp: Call a special session of the Georgia Legislature.’ And if they do not do it … they have not earned your vote.

“Don’t you give it to them. Why would you go back and vote in another rigged election?”

At the best of times, this would be reckless talk. But with so much at stake in the Senate, it’s treachery.

Yes, Trump has every right to challenge the results of a most peculiar election.

But if allegations of election fraud end up depressing the Republican vote in Georgia on Jan 5, and delivering the Senate into radical hands, history will not look so kindly on his presidency.

But at 2 a.m. the day of the event, its building on East 83rd Street was vandalized as a warning against socializing.

Black garbage bags stuffed with paper and fashioned to look like body bags were laid across the entrance.

“You’re canceled” “Super-spreader” and the anti-police slogan “ACAB” were spray painted on the front door and glue was inserted in the lock.

Club President Ian Walsh Reilly says police reviewed security camera footage and have determined it was an attack by hooded Antifa types, perhaps targeting a separate function by young Republicans they mistakenly believed was being held there.

Either way, “It’s very disturbing,” Reilly says. “We are the most prominent symbol of the Republican Party in this city. Why can’t we just be left alone?”

A good question that a lot of people are asking these days.