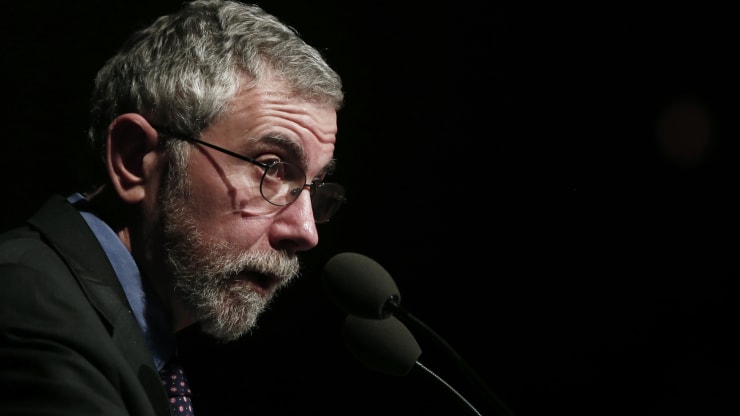 The U.S. may need several hundred billion dollars a month in “disaster relief” to keep the economy afloat as a raging coronavirus outbreak continues to suppress prospects for workers and businesses, Nobel prize-winning economist Paul Krugman said on Thursday.

“We really are still very much in the disaster relief stage,” he told CNBC’s “Street Signs Asia.”

Krugman, an economics professor at City University of New York’s Graduate Center, said it’s difficult to put a total price tag on an ideal relief package for the U.S. But he stressed that a “really, really big” one is needed given that the U.S. hasn’t managed to contain the virus.

The economist, whose research interest includes macroeconomics and international economics, won the Nobel prize in 2008 for his analysis on trade patterns and location of economic activity.

“We’re still 11 million jobs down from where we were before this thing hit and all of those people are without wages, state local governments are in extreme financial distress, thousands of businesses — maybe hundreds of thousands — are on the verge of collapse,” he said.

“So we need a lot to keep this thing afloat.”

The U.S. enacted a $2 trillion package known as the CARES Act in March, but those benefits have either expired or will soon end. Negotiations for another pandemic relief has been at an impasse for months after Republicans and Democrats failed to agree on what should be in the package.

Democrats proposed another $2.2 trillion relief package that includes funding for state and local governments, as well as extending enhanced unemployment benefits of an additional $600 weekly subsidy. Republicans, meanwhile, wanted a smaller deal that would focus more on payment to individuals and business loans.

Senate Majority Leader Mitch McConnell (R-Ky.), who has won his reelection bid for a seventh term, said on Wednesday that the additional relief package will be his priority when the chamber reconvenes next week.

Still, Krugman said there’s no indication that McConnell would agree to a large relief bill or extend enhanced unemployment benefits which have been the “most important policy” to cushion the pandemic’s economic impact.

Republicans, he noted, viewed those benefits as “rewarding people for not working” and therefore, may not be inclined to renew that payout.

“That was far more effective than anything else in the package, but we’ve seen very, very little … on the part of Senate Republicans to resume enhanced employment benefits,” he said.