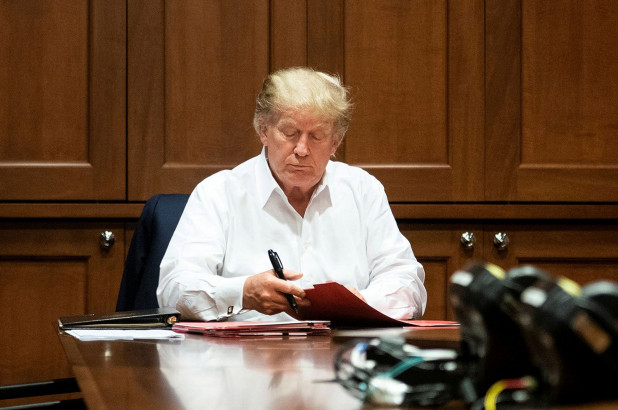 President Trump is not a basement guy.

Sure, he could have done a Joe Biden and hidden in the White House the last five months, a president under quarantine cowering from the Chinese virus.

The symbolism would have been disastrous for the mightiest nation on the planet. Trump had to show fearlessness in the face of the virus. House Speaker Nancy Pelosi last week called his refusal to kowtow to the coronavirus a “brazen invitation” to get sick.

But, as the president told his old friend Rudy Giuliani on Saturday afternoon, he took the risks he had to take, because “Great generals do not lead from behind. They get out front and motivate the troops.”

He was speaking to the former Big Apple mayor by phone from his hospital room at Walter Reed Medical Center, where he was flown by helicopter after his oxygen levels began to fall.

“I knew there was a risk that I could catch [the virus]. But if I couldn’t accept that risk, I should resign . . .

“I am the president of the United States. I can’t lock myself in a room . . . I had to confront it so the American people stopped being afraid of it so we could deal with it responsibly.

“If I had handled it any other way, I would have created more panic, more fear in the American people . . .

“I’m going to beat this. Then I will be able to show people we can deal with this disease responsibly, but we shouldn’t be afraid of it.”

Giuliani, widely praised for his leadership during the Sept. 11, 2001, terrorist attacks, knows a thing or two about leadership. His staff urged him to retreat to safety in Brooklyn after the Twin Towers were attacked, but instead he went straight to Ground Zero.

“You can only lead from the front,” he says.

Trump reiterated the message Saturday night in a four-minute video from Walter Reed.

“This is America, this is the United States . . . This is the most powerful country in the world. I can’t be locked up in a room . . . As a leader, you have to confront problems.”

The fact is that a president doing his job and running for re-election necessarily is in contact with thousands of people. It’s not surprising he would contract the highly infectious coronavirus, regardless of precautions.

Biden’s timid behavior is not a model for how a president needs to behave. The obsessive measures taken to protect the 77-year-old border on fetishistic, with elaborate social distancing circles taped on the ground and masks at 20 paces. Staff yell, “Keep back!” and “Six feet.”

If this was your grandfather, you would appreciate the caution. But a president can’t be paralyzed by fear, and neither can the country.

The virus is no longer a death sentence. Treatments have been found, the fatality rate has plummeted and vaccines are on the horizon.

For political advantage, Democrats have tried to keep Americans scared, depressed and under house arrest, while blaming the president for every COVID death. Sensible Americans reject this perverse framing of the pandemic.

Maybe the basement option works for those in the media and protected classes who have jobs that allow them to sit at home and conduct business via Zoom.

But in order for them to eat and have their groceries delivered, somebody had to get out in the real world and risk the virus.

Those scolding the president and his supporters, tut-tutting about masks and social distancing, are sacrificing the welfare of children and young people who are least at risk.

For some, being cooped up inside is a death sentence worse than the virus.

We will see how the president, 74 and overweight, pulls through. But the signs are good, say his doctors, and he could be released from the hospital in the next couple of days.

Trump adapted to the virus. His rallies became open-air events at airports around the country, with the theatrical backdrop of Air Force One gleaming splendidly under klieg lights.

At his last rally, Saturday night at the Harrisburg airport in Pennsylvania, he stood out in the rain, valiantly performing in his wet suit for two hours.

The cheers were even more ecstatic than I remembered at his old indoor rallies, with a new chant of, “We love you.”

“I love the man because he cares about this country and he fights for us,” said attendee Teresa Tavoletti, a self-described “50-something suburban woman” who had driven from New Jersey.

I heard the same from people across the crucial swing state of Pennsylvania. I saw it in Weirton, West Virginia, last weekend, at a gathering of 300 Trump supporters in a “Trump train,” a parade of vehicles and trucks waving Trump flags.

“He supports my livelihood, which is oil and natural gas,” said Jason Laster, 44, of Wellsburg, West Virginia. “He supports the right to bear arms. I just feel like he’s done great things for the country already. And, four more years, if we can get Pelosi to quit trying to impeach him, then I feel like he’s going to do a bunch more great things.”

You see the enthusiasm for the president outside Walter Reed, where stalwarts have gathered to wave flags outside his window and cars honk their horns in appreciation.

You see it in new voter registrations, from Florida to Pennsylvania and West Virginia, where Republicans are outstripping Democrats by as much as two to one.

If the president bounces back onto the campaign trail, he will be an invincible hero, who not only survived every dirty trick the Democrats threw at him, but the Chinese virus as well. He will show America we no longer have to be afraid.

Those who know Cardinal George Pell, the pope’s honest former finance minister, always suspected he had been set up when he was jailed on historic child sex abuse charges in his native Australia, and then acquitted on appeal.

Now bombshell reports in the Italian media allege that Pell’s fiercest foe at the Vatican, the recently fired Cardinal Giovanni Angelo Becciu, wired 700,000 euros (about $822,000) from Vatican accounts to “recipients in Australia who helped ensure hostile testimony” during Pell’s trial in that country’s state of Victoria.

Before Pell flew back to Rome last week, he issued a statement from Sydney, one day after Becciu’s firing, hinting that the Vatican was involved in his malicious prosecution.

“The Holy Father was elected to clean up Vatican finances. He plays a long game and is to be thanked and congratulated on recent developments,” Pell’s statement said.

“I hope the cleaning of the stables continues in both the Vatican and Victoria.”

Do the math, MAA

Mathematicians always hoped their field was the one human endeavor where reason would prevail over woke madness.

But no such luck. The Mathematical Association of America has succumbed.

“It is time for all members of our profession to acknowledge that mathematics is created by humans and therefore inherently carries human biases,” the MAA said in a statement.

Is there a cure for anti-Trump disease?