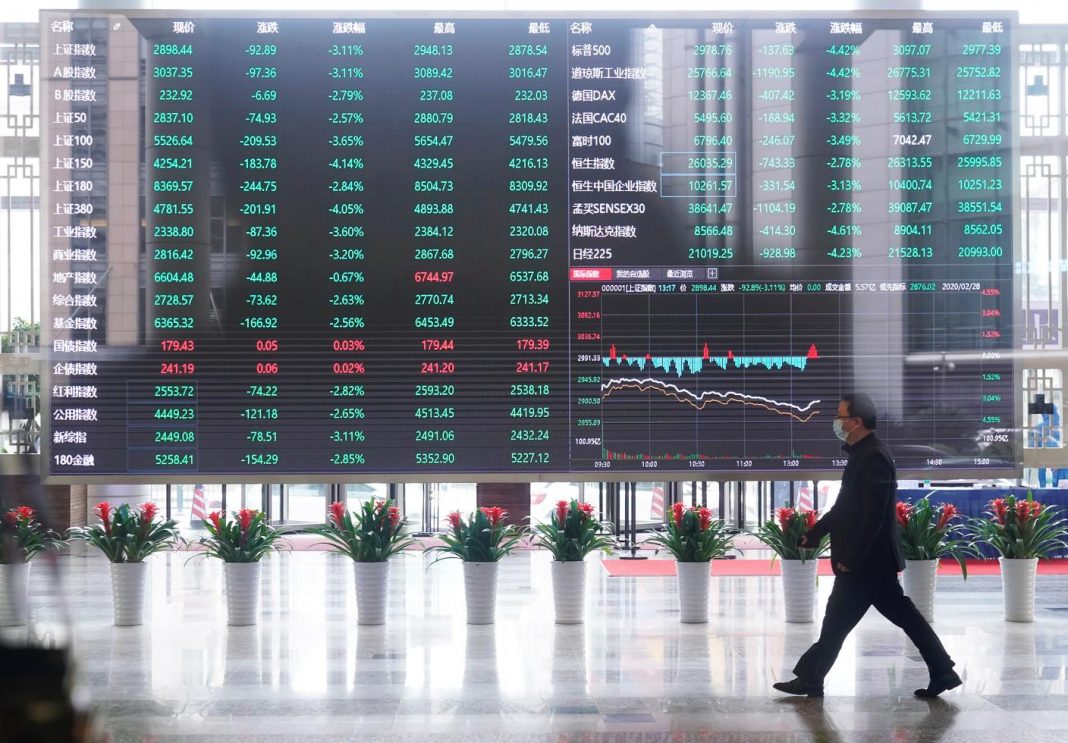 Stock markets rebounded on Friday following Wall Street’s lead, but were set for their softest week in about a month as investors grapple with tepid economic data and lofty valuations after a huge rally that has wiped out coronavirus losses.

MSCI’s broadest index of Asia-Pacific shares outside Japan rose 1.1% on Friday, as indexes in Korea, Taiwan and Hong Kong repaired Thursday’s losses. However, the broad gauge is poised to end the week barely ahead of where it began.

Japan’s Nikkei edged up 0.4% but was headed for a 1.4% weekly drop, while a bond market selloff has also moderated as caution and summer-time lassitude weighs on the mood.

Futures were mildly positive, but similarly lacking in direction with EuroSTOXX 50 futures up 0.4%, FTSE futures up 0.1% and S&P 500 up 0.3% in the wake of another tech-inspired record intraday high on the index.

The S&P 500 has rallied 54% from its March low in a world awash with monetary and fiscal stimulus, but money managers are reckoning further gains will be harder to come by.

“All of this rise in the equity market has not really coming from earnings, but more from lower yields,” said Frank Benzimra, head of Asia equity strategy at Societe Generale in Hong Kong.

“You’re going to have some limit to where the yield can fall (further) and push the S&P higher. So I think we are maybe now, at this level of the equity market, in a period of a question mark,” he said.

Overnight, clouds returned to the U.S. labour market outlook, with weekly jobless claims back over a million to put the total number of Americans on unemployment benefits at 28 million.

The Philadelphia Federal Reserve’s business index also missed expectations and together the weak readings pushed down nominal U.S. yields and dragged on the dollar. Benchmark U.S. 10-year debt yields were last steady at 0.6574%.

Investors are looking ahead to purchasing managers’ index surveys across Europe, Britain and the United States – where steady, slightly positive, readings are expected – for the next broad gauge of the recovery’s progress.

A bounce in the wake of the release of Federal Reserve minutes that fell short of dovish market expectations wore off fairly quickly and the dollar looked set for a ninth consecutive weekly loss against a basket of currencies. [FRX/]

Sterling reversed losses against the dollar to sit at $1.3245 and the risk-sensitive Australian dollar again sojourned above $0.72. The euro edged up to $1.1878.

Currency traders are increasingly focused on an address next Thursday by Fed Chair Jerome Powell in case he reveals any details of an expected shift in policy emphasis – especially around inflation – that were absent in the minutes.

The Japanese yen inched up to 105.59 after an inflation miss supported real yields. The Thai baht is tracking for its worst week in a month as investors begin to fret about political unrest.

Elsewhere, and perhaps indicating the low bar for impressing traders, markets interpreted the lack of a U.S. rebuff to a Chinese push for trade talks soon as a positive sign and the yuan hit a seven-month high of 6.8935. [CNY/]

In commodity markets, the prospect of production cuts had oil prices on track for a third straight weekly gain. Brent crude futures were last up 0.4% at $45.07 a barrel and U.S. crude future rose 0.3% to $42.95 a barrel.