Home Markets ‘We are on our own’: Experts call for overhaul of African investment... 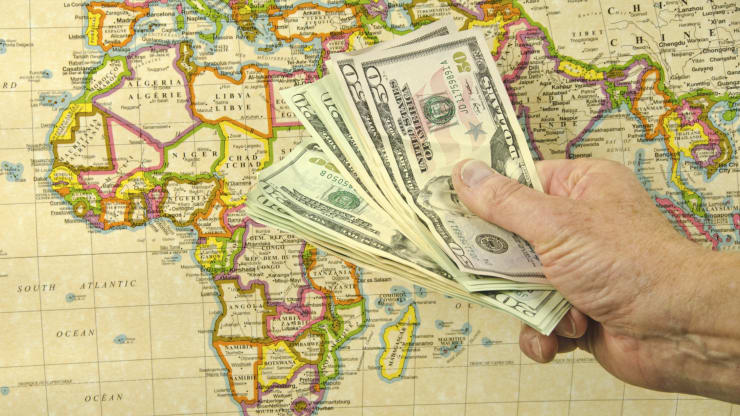 Despite offering some of the world’s highest-yielding government bonds, investment in Africa has been limited by a presumption of risk from international investors, a situation experts have said is rooted in bias.

Many African nations are not borrowing as much as those in developed markets, with sub-Saharan African countries typically borrowing between 40% and 60% of GDP (gross domestic product), while U.S. public debt sat at 106.9% of GDP in 2019.

Yet investors into the continent often expect significant risk premiums, meaning African nations pay more for debt than developed economies or even other emerging market counterparts. Ghanaian Finance Minister Ken Ofori-Atta told Bloomberg this week that the global financial infrastructure is not fit for purpose, citing the risk premiums on African countries as unjustifiable and calling for a “redesign” of the system.

In a webinar last week, Michael Nderitu, chief risk officer at pan-African payments and trading platform AZA, attributed this in part to the “dollarization effect,” in that investors looking to withdraw money face a dollar shortage due to the scarcity of dollars on the continent. The panel of experts also decried the inherent bias that accompanies the assumption of increased risk, and urged African investors to look inward to bolster their own capital markets.

Former Renaissance Capital Chairman Christophe Charlier told the panel that a “laziness premium” on the part of investors was also applied, in that investors prefer companies and countries that return to the market frequently so that they are able to reuse their homework on a particular issuer multiple times.

He also suggested liquidity concerns, and investors’ desire to get in and out of a particular investment easily, as an inhibiting factor, since many African nations lack a secondary market to sell a bond on unencumbered.

An often cited example of the divergence between emerging market debt in Africa and elsewhere is the contrast between Angola and Argentina, the former of which has not defaulted on its debt since the end of its civil war in 2002 and yet is charged at a higher rate for shorter-dated bonds than the latter.

“Investors know the risk of Argentina: if something happens, all of the investors will get together over a beer and say, ‘argh, Argentina did it again!’ and they will all feel okay because all of their friends will have been in the same boat, and all of them will be suffering equally,” Charlier told the panel.

“If, however, one of them takes a risk on an African country, and the deal goes south, that person will have taken that risk alone and then will need to justify it to their investors, to their bosses and to their investor friends, who will say: ‘Why did you even bother looking at that?’

These biases keep getting perpetuated. This is the narrative that we have to change. It has to be done yesterday.

Often cited deterrents to international investment in Africa include high corruption levels in certain countries, heavy-handed bureaucracy and regulation and a lack of infrastructure, and Nderitu suggested that African governments do share some of the blame.

“When these trading blocs really work to improve our ability to coordinate to ease business, this is when we will be able to kill the dollarization effect so that we can trade locally.” He highlighted that even local trades are all too often settled in dollars, so African investors must have a role in helping governments initiate trading blocs and killing “cumbersome investment requirements and legislative processes.”

Despite the rapid pace of reforms in recent years, Sub-Saharan Africa’s average ease of doing business score was 51.8 on a scale of 0 to 100 in the World Bank’s latest rankings, below the OECD high-income average of 78.4 and the global average of 63.0.

Another issue often given for a lack of international investor interest in the continent has been a relative lack of reliable data on its capital markets. However, Kojo Annan, director of London and Accra-based family office Vector Global, said the dominant narrative of inherent risk means many investors would not take the time to delve into the data even if it were readily available across the continent.

“I think you can even go a step further and say that the game has already been created in a biased fashion against you, so you are playing a losing game before you start,” Annan, the son of former UN Secretary-General Kofi Annan, suggested.

“As a bond investor is looking for interest rates much, much higher than would be applicable in the West, then already you are on a losing footing because as an African government, I am borrowing at 8%, 10%, 12%, and another guy is borrowing at half a percent, 1%: where is the equity there?”

Annan argued that a change in narrative to overcome historic biases around African markets lacking the economic and financial sophistication of the developed world or being prone to default “has to be done yesterday.”

Much of the data used to assess African investment on a global scale is derived from risk ratings issued by major ratings agencies such Moody’s, S&P and Fitch.

Fulu Mudau, fixed income and currencies specialist with Deutsche Bank in Johannesburg, questioned whether the methodology used by international agencies was appropriate for Africa, and whether the agencies had sufficient resources on the ground to understand African politics. Nderitu added that a lack of resources dedicated to understanding African credit markets leaves agencies vulnerable to the influence of historic biases.

“The likes of Zambia, Tanzania and Namibia have questioned the outcome of their ratings and said they weren’t adequately consulted, and that there is a misunderstanding of the situation that’s happening,” Mudau said.

“If our data sources on systemic issues and the actual situations come from offshore, if we are not telling our own stories, then how do we even start to change the narrative?”

Charlier characterized the coronavirus as the “perfect storm” for African economies to look to create domestic capital markets and reimagine their supply chain reliance on overseas partners.

If our data sources on systemic issues and the actual situations come from offshore, if we are not telling our own stories, then how do we even start to change the narrative?

With foreign investors demanding huge risk premiums, he proposed that local and regional investors who understand the politics and economics, and possess their own “home bias,” could require lower risk premiums and become the “backbone of the capital markets.”

Annan said the coronavirus crisis provides a unique opportunity for Africa to undergo a “complete reset,” to build local enterprise and internal trade systems rather than relying on intercontinental trade and financing agreements. The African Continental Free Trade Agreement (AfCFTA), which has been delayed due to the pandemic, has long been touted as a potential trigger of intracontinental trade on the continent.

“When push comes to shove, we are on our own. Nobody was coming to bail us out when they thought we were going to die in the millions, so if that is not a wakeup call for the continent, I don’t know what is,” Annan concluded.