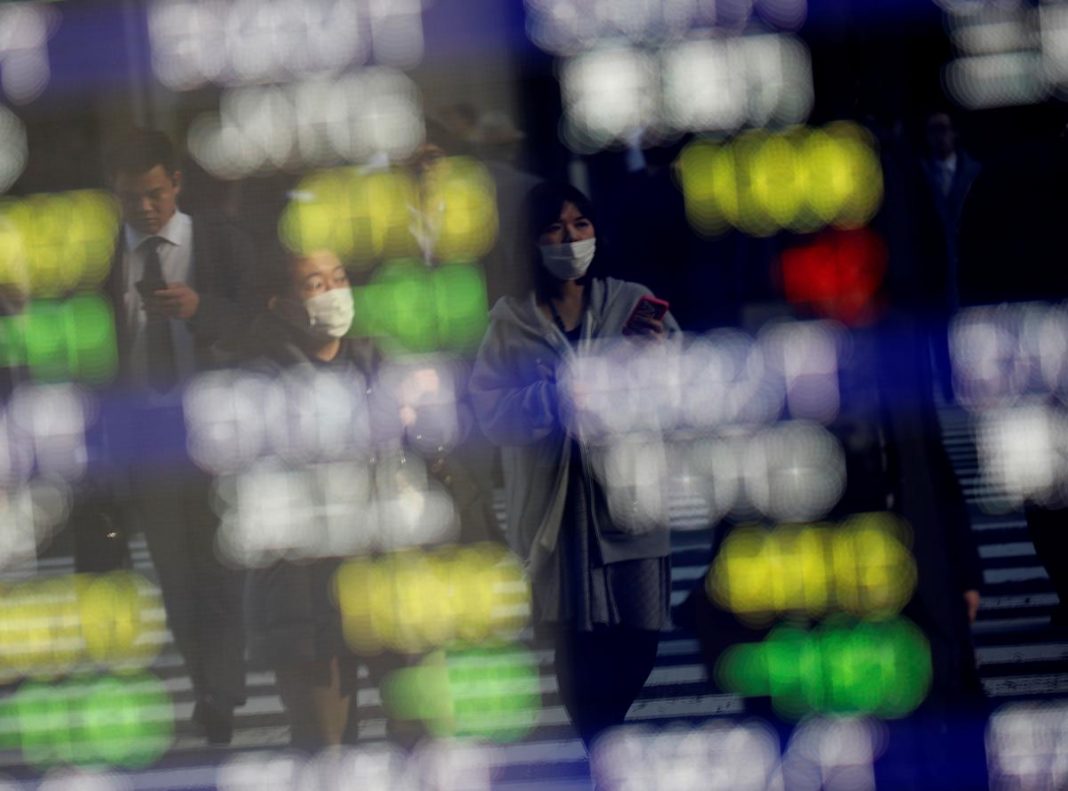 MSCI’s broadest index of Asia-Pacific shares outside Japan .MIAPJ0000PUS ticked up 0.25% on Friday for weekly gain of 1.77%.

China’s blue-chip CSI300 shares .CSI300 rose 0.69%, having recovered a whopping 95% of their losses made after the outbreak.

The index of Chinext high-tech shares .CHINEXT rose 0.8% to hit a two-year intraday high, led by gains in some biotech names.

“China is already easing its monetary policy and providing more liquidity while more stimulus is likely. Factories are starting to reopen albeit with some delays,” said Yukino Yamada, senior strategist at Daiwa Securities.

Japan’s Nikkei .N225 dropped 0.59%, not helped by the news of first coronavirus death and signs of a potential rise in domestic infections in the country.

The daily death toll in Hubei, the Chinese province at the center of the coronavirus outbreak, halved and the number of new cases dropped from a record posted the day before.

Ryutaro Kimura, fixed income strategist at Axa Investment Management, expected “considerable impact” on the global economy as China now accounts for around 17% compared to 4% during the SARS outbreak in 2002-2003, and it is integral to more supply chains.

“That means countries are likely to keep interest rates low for a longer period, keeping global bond yields low. Such an expectation in turn is supporting the world’s share prices.”

Market sentiment improved also after World Health Organization official said the big jump in China’s reported cases reflects a decision by authorities there to reclassify a backlog of suspected cases by using patients’ chest images, and is not necessarily the “tip of an iceberg” of a wider epidemic.

Still, skeptics saw it as undermining confidence in data accuracy, a constant issue in Chinese data.

While many investors hope the epidemic will gradually slow down in coming months, allowing companies to come back to normal operations, how long that process will take remains anybody’s guess.

“Until Wednesday, people had been saying that you can buy shares because the number of new cases had peaked out. The reality seems to be quite different. An early end to this seems improbable,” said Norihiro Fujito, chief investment strategist at Mitsubishi UFJ Morgan Stanley Securities.

“Investors will surely avoid Asia for the time being and will shift funds to the U.S., geographically the most separated from the region,” he said.

That meant more demand for the U.S. dollar in the currency exchange market.

The dollar’s index against a basket of currencies =USD hit a four-month high, having risen 1.8% so far this month.

The euro has been bruised also by rising political uncertainties in Germany as well as worries about sluggish growth in the region.

Annegret Kramp-Karrenbauer, who had been long expected to succeed Chancellor Angela Merkel next year, earlier this week gave up her bid to run for the top job, raising more concerns about political stability in the euro zone’s biggest economy.

Euro zone GDP data due later on Friday is expected show a sluggish growth of 0.1% from the previous quarter.

Sterling jumped and so did UK bond yields as investors bet on a higher-spending budget next month after British Prime Minister Boris Johnson forced the resignation of Sajid Javid as finance minister.

Javid, known to have been at odds with Johnson’s powerful policy adviser Dominic Cummings over spending plans, was replaced by Rishi Sunak, a Johnson loyalist.

The 10-year gilts yield jumped to a three-week high of 0.660% GB10YT=RR, bucking falling yields in most other major bond markets.

The yen stayed in a familiar range in the past couple of weeks and last traded at 109.80 yen JPY=.

Oil prices extended their week-old recovery on hopes that the world’s biggest producers would cut output more as demand looks set to drop sharply due to the outbreak of coronavirus.

The International Energy Agency (IEA) expects oil demand in the first quarter to fall for the first time in 10 years.

U.S. West Texas Intermediate (WTI) crude futures CLc1 were up 0.12% at $51.48 per barrel in early Friday trade but up 2.3% on the week, on course to post their first weekly gains in six weeks.