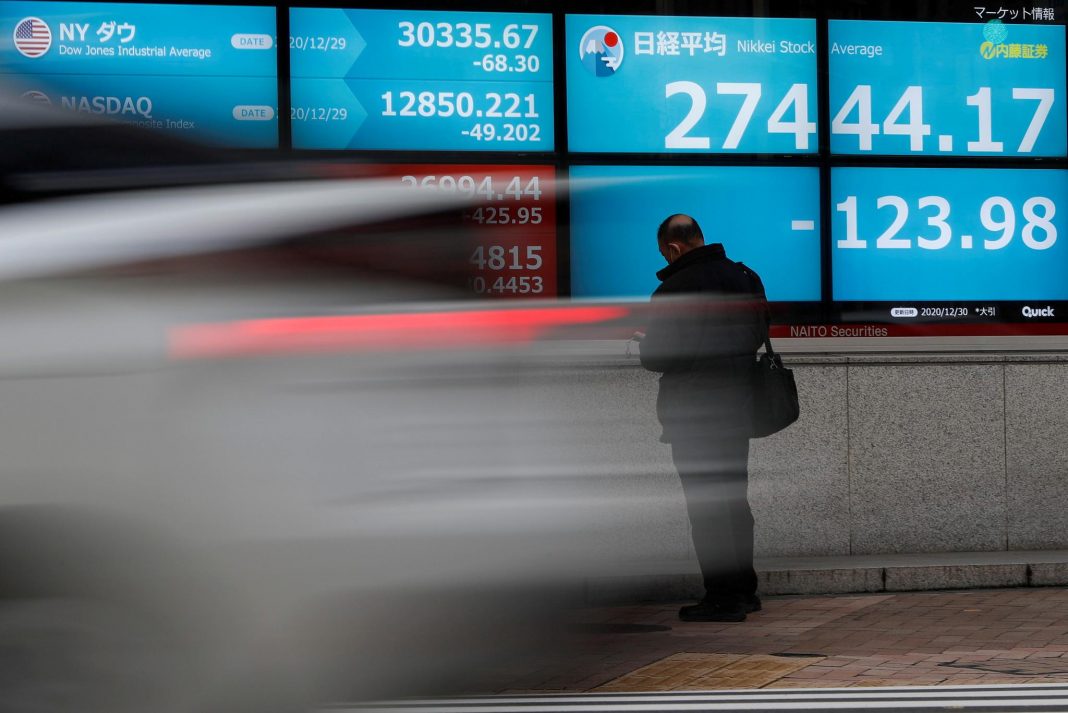 World stocks held near a record high and the euro was on course for its best month in nine as strong U.S. data and corporate earnings plus the Federal Reserve’s commitment to support the economy fuelled investors’ appetite for risk.

MSCI’s broadest gauge of world stocks covering 50 markets dipped 0.1% but remained close to a record peak touched the previous day, up 5% on the month.

In Europe, euro Stoxx futures were steady and Britain’s FTSE 100 traded up 0.2%.

“The Federal Reserve continues to support, Biden has this huge stimulus programme as well and the earnings season continues — so far we have seen relatively benign as well as strong earnings,” said Eddie Cheng, head of international multi-asset portfolio management at Wells Fargo Asset Management.

That came against the backdrop of the Federal Reserve’s reassurance on Wednesday that it was not time yet to begin discussing any change in its easy monetary policy.

With just over a half of S&P 500 companies reporting earnings, about 87% beat market expectations, according to Refinitiv, the highest level in recent years.

For both the MSCI world index and the S&P500, analysts are expecting earnings in the next 12 months to recover to above pre-pandemic levels.

Preliminary euro zone GDP data at 0900 GMT, meanwhile, is expected to show a drop of 2% in the first quarter, according to a Reuters poll, which would mean a fall into a technical recession, say Commerzbank analysts.

“However, there is increasingly bright light at the end of the tunnel,” they added.

“The speed of the vaccinations is picking up and the EU recovery fund is also finally getting off the ground.”

New coronavirus infections in India surged to a fresh record and France’s health minister said the dangers of the Indian variant must not be underestimated.

“Risky assets have had quite a few wobbles within the month,” said Cheng.

“We need to get used to the fact that this is not going to be a straight line.”

The euro extended its bull run to a two-month high of $1.2150 in the previous session and it last stood at $1.2100, down 0.15%. With 3.2% gains so far this month, the single currency is on course for its biggest monthly rise in nine months.

The dollar was steady against the yen at 108.86. It gained 0.13% against a basket of currencies, after hitting a two-month low on Thursday.

The Canadian dollar hit a three-year high of C$1.22680 per U.S. unit, boosted by the Bank of Canada’s tapering of its bond-buying programme and higher commodities including oil and lumber.

Mainland Chinese shares lost 0.8% while Japan’s Nikkei also shed 0.8% on position adjustments ahead of a long weekend. Both markets will be closed through Wednesday.

Oil prices took a breather after hitting six-week highs on strong U.S. economic data, on concerns about wider lockdowns in India and Brazil.