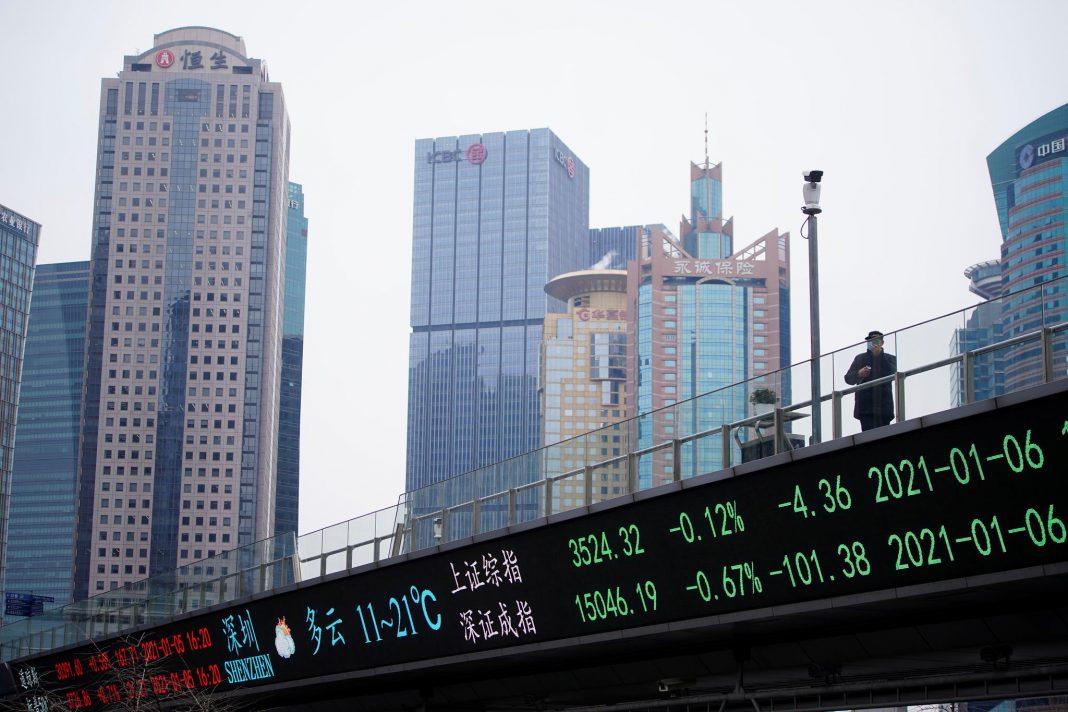 Asian shares advanced on Friday, lifted by rising Chinese blue-chips and a decision by the European Central Bank to maintain stimulus, while investors largely shrugged off the impact of a possible U.S. capital gains tax hike.

But equity markets in Europe were set to open lower after two days of gains. In early European trades, pan-region Euro Stoxx 50 futures were down 0.25%, German DAX futures slipped 0.35% and FTSE futures shed 0.43%.

Modest moves in equities markets contrasted with ructions in cryptocurrencies as investors fretted over the impact of tax changes.

The ECB’s decision to leave policy on hold came despite its prediction of a strong rebound in the euro zone economy from mid-year as COVID-19 infections are brought under control.

“There were a couple of subtle acknowledgements today that an upgrade to forecasts is likely coming at the June 10 meeting,” said Ray Attrill, head of FX strategy at National Australia Bank. “Lagarde did highlight the pick-up in vaccinations and noted high frequency data are confirming to ECB staff that their previous view of an improvement in the medium-term (is) on course.”

In a hit to stock market sentiment overnight, the administration of U.S. President Joe Biden was reported to be seeking an increase in the capital gains tax to near 40% for wealthy individuals, almost double the current rate. The Dow Jones Industrial Average ended down 0.94%.

“The move on the Dow overnight I think needs to be seen in the context that its had a remarkable run up,” said James McGlew, executive director of corporate stockbroking at Argonaut. “I don’t think people are completely negative on the fact that those tax changes are being flagged. Ultimately it’s money that will feed back into the economy.”

In Asia on Friday MSCI’s broadest index of Asia-Pacific shares outside Japan shook off early small losses to rise 0.43%.

In the currency market, the euro edged up less than 0.1% on the day to $1.2029 after dipping a day earlier. The dollar was slightly lower against the yen at 107.92 and the dollar index, which tracks the greenback against a basket of currencies of other major trading partners, fell 0.11% to 91.188.

The yield on benchmark 10-year Treasury notes was slightly higher at 1.5613% after the capital gains tax reports pulled yields lower on Thursday.

U.S. crude rose 0.73% to $61.88 a barrel and global benchmark Brent crude added 0.54% to $65.75 per barrel as investors looked for an economic recovery to drive fuel demand in the United States and Europe.

Spot gold was flat at around $1,784 per ounce, but was still set for a weekly rise on soft Treasury yields and a subdued dollar. [GOL/]