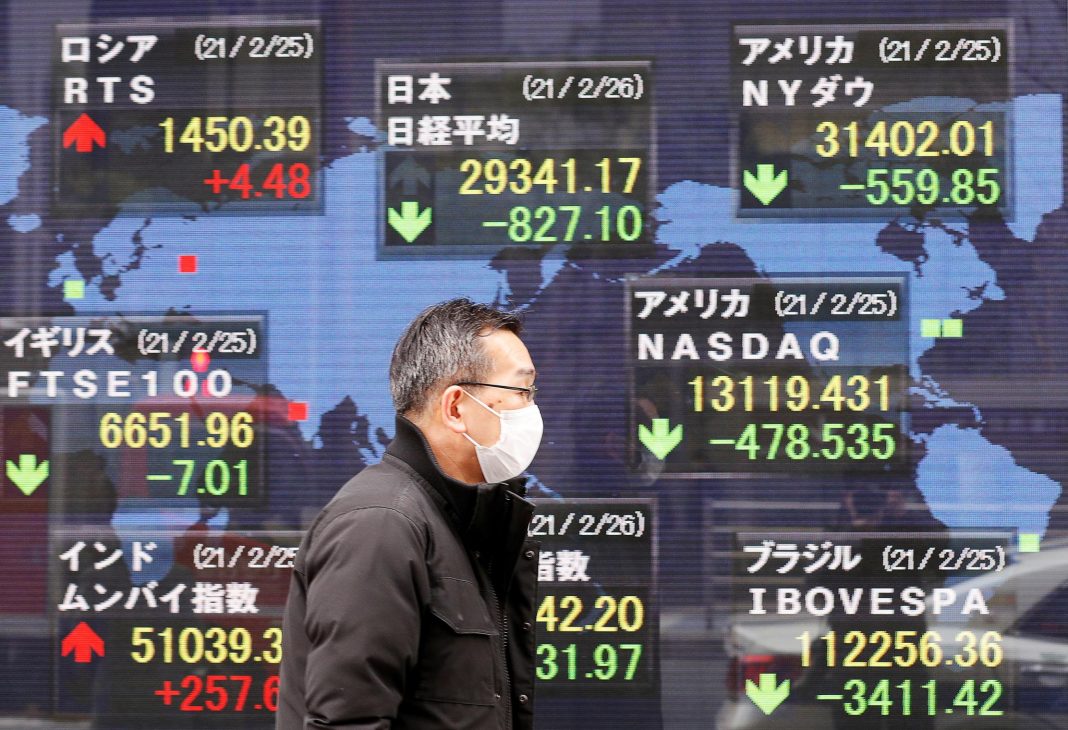 Stocks hovered near a record high on Tuesday, supported by strong economic data from China and the United States, while currency and bond markets paused for breath after a month of rapid gains in the dollar and Treasury yields.

Profit-taking pushed Japan’s Nikkei down 1% and dragged on the Shanghai Composite, though European futures rose ahead of the first trading session after Easter.

“On aggregate, it’s good for the global economy and therefore that’s a justification to move into more cyclical-sensitive FX pairs and to buy stocks in general,” said Kyle Rodda, market analyst at brokerage IG in Melbourne.

“Yields haven’t budged much and so tech stocks have outperformed,” he said.

The yield on benchmark 10-year U.S. Treasuries fell 1.7 basis points to 1.6897%, while the U.S. dollar has mostly missed out on a big bounce from the strong data and held at $1.1810 per euro after posting its steepest drop in weeks.

Elsewhere, Credit Suisse sought to draw a line under its exposure to the implosion of hedge fund Archegos Capital announcing the debacle would cost it about $4.7 billion and two senior executives their jobs.

The steadying Treasury yields and greenback follow a charge higher over the first quarter, with an 83 basis point rise in 10-year yields, the biggest quarterly gain in a dozen years, and a 3.6% rise in the dollar index – the sharpest since 2018.

“Bonds have settled down now,” said Omkar Joshi, portfolio manager at Opal Capital Management in Sydney, after a hard and fast selloff. “I think markets can keep powering on from here.”

Minutes from the March meeting of the U.S. Federal Reserve, due on Wednesday, are the next focus for bond markets, although they will not address the most recent data surprises and markets have run far ahead of Fed projections for years of low rates.

Fed funds futures have priced in a hike next year while eurodollar markets have it priced by December.

“What needs to be tested is how the Fed reinforces and reassures on its flexible average inflation target policy,” said Vishnu Varathan, head economist at Mizuho Bank in Singapore.

“The dollar’s past few weeks of movement reflects markets moving ahead despite what the Fed has said,” he added.

Currencies were fairly quiet through the Asia session, and hung on to small gains on the dollar. The Australian dollar traded at $0.7647 after the central bank held policy settings steady, as expected.

The dollar’s wobble helped oil prices recoup some losses suffered on Monday on worries a new wave of COVID-19 infections in Europe and India can curtail energy demand. [O/R]