In a wider perspective, the dollar could suffer further losses amid rising political uncertainty surrounding the November elections

Global stock markets keep bleeding on Monday amid rising concerns over rising coronavirus cases globally. As risk aversion intensified, the greenback manages to erase losses versus high-yielding counterparts in recent trading. However, as the safe-haven Japanese yen demand picked up, USDJPY derailed the 104.00 handle for the first time in six months.

The pair has been losing ground for the sixth day in a row already, struggling to regain bullish bias following another rejection from the 20-daily moving average that now arrives around 105.70. USDJPY could extend losses despite the daily RSI has entered the oversold territory as the greenback is being additionally pressured by fading hopes of another round of fiscal stimulus measures.

In the short-term, if the 104.00 handle gives up, the pair could target the 101.00 level that capped the bearish pressure during a global sell-off witnessed in March. Later in the day, the Federal Reserve Governor is set to deliver a speech that could affect USD pairs including USDJPY. If Powell strikes a less dovish tone than expected, the prices could stage a bounce from lows and even erase intraday losses if risk aversion abates. So far, investor sentiment leaves much to be desired, with US stock futures pointing to another sell-off on Wall Street.

From a wider perspective, the dollar could suffer further losses amid rising political uncertainty surrounding the November elections that will likely add to nervousness among investors in the weeks to come. Now, as the pair is flirting with the 104.00 level, a break below this support could send the prices to the 103.80 area.

As of writing, the greenback was changing hands around 104.20, having bounced from the psychological level during the European hours. If the selling pressure eases in the short term, the prices could regain the 104.55 region. Anyway, the 104.00 figure remains in the market focus for the time being. 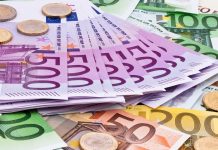 USDJPY: volatility may pick up after a range-bound trading