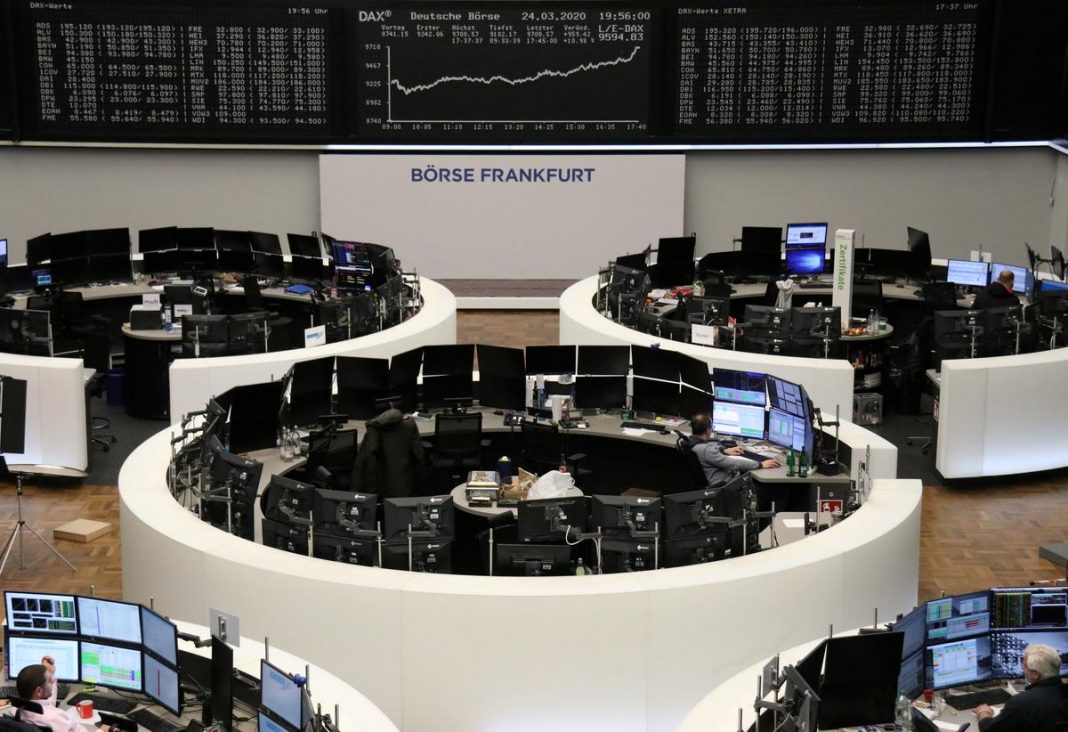 With an 8% surge on Tuesday, swings last seen at the height of the 2008 financial crisis, the benchmark index has recovered its losses from mid March, but remains more than 25% below its record high last month.

On Wednesday, U.S. officials reached a deal on a $2 trillion package to aid small businesses and Americans hit by layoffs due to the health crisis, but with growing evidence of a breakdown in economic activity, analysts said a global recession was looming.

“It’s very good that authorities came up with monetary and fiscal co-ordination, but that’s only damage limitation and it doesn’t necessarily help to stimulate the economy yet because we’re still in a lockdown,” said Stefan Koopman, senior market economist at Rabobank.

“Over the course of the summer, economic activity can pick up a little bit, but even then we’re still way behind growth rates from 2018 and 2019. It will be a very very long year for Europe.”

European airlines, one of the worst hit sectors from travel restrictions and evaporating passenger numbers over fears of contagion, have appealed to governments for bailout packages to prevent a collapse of the aerospace industry.

German shares .GDAXI jumped 3.7% after posting their best day since 2008 on Tuesday, while Europe’s fear gauge .V2TX fell for the fifth day in a row as a modicum of calm returned to financial markets.

“The Vix … most certainly needs to fall below 30 and only then the real buyers return,” said Stephen Innes, a markets strategist at AxiCorp.

“Ultimately none of that will happen until the data has bottomed and signs of life emerge around the world.”

With the pandemic still far from contained in Europe, several more companies have warned of lower profits, layoffs and a halt in business activity amid widespread national lockdowns.

German conglomerate Thyssenkrupp (TKAG.DE) said it would cut 3,000 jobs at its steel unit by 2026 as part of a wage deal it struck with powerful labor union IG Metall. Its shares rose 22.7% and were among the biggest gainers on the benchmark index.

Pest control company Rentokil Initial (RTO.L) slumped 9% and was one of the biggest drags on the STOXX 600 after withdrawing its 2020 forecast and saying it was clamping down on spending to deal with the collapse of some business.