Home Opinions These companies help Amazon and Walmart haul away all the stuff Americans... 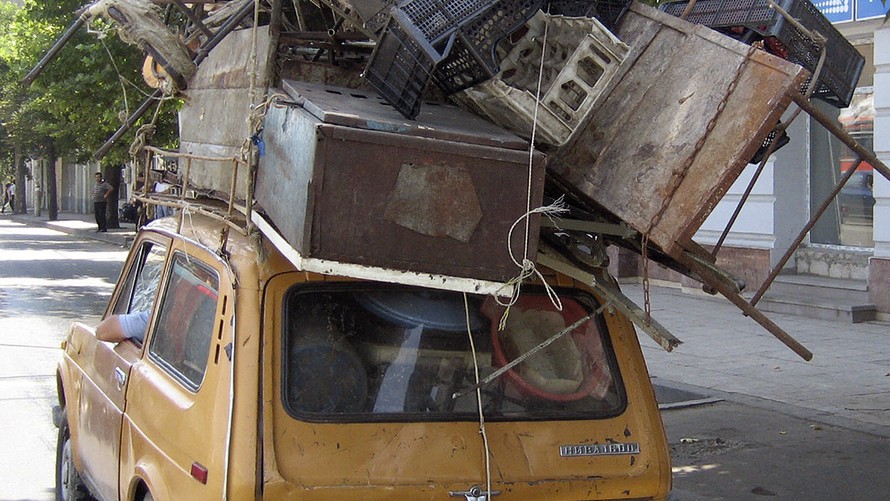 E-commerce sellers, or e-tailers, have transformed the way we shop, undermining brick-and-mortar retailers with a promise of convenience and efficiency. But one aspect of their business model has swung so far to maximize consumer convenience that it’s created something of a monster: a deluge of customer returns.

Shoes and clothes are the biggest culprits behind that expanding pile of delivery boxes in your house. To meet consumers’ demand for the perfect fit, online retailers will send out several boxes of the same shirt or pair of shoes in different sizes and colors and allow free returns for the rejects. Living rooms have become the new dressing rooms, resulting in a flood of returned goods, often jumbled up and in less-than-pristine condition.

This, together with incremental other “non-conforming inventory” such as overstocks or floor goods, has morphed into a major headache for the retailers. Handling returns costs U.S. retailers over $100 billion each year, and they simply don’t have the staffing or infrastructure to deal with this non-core part of their operations.

Enter re-commerce players. These emerging “reverse logistics” companies are targeting the returns pain point for retail giants like Amazon AMZN, +1.20%  and Walmart WMT, -0.36%  by buying rejected items from them at steep discounts, fixing any minor problems or flaws, and then re-selling them at a hefty profit.

It’s a win-win situation because the big retailers get to outsource their return operations and recoup some losses on the sale. Amazon can even make money on the back end if, as often happens, the re-commerce businesses sell the refurbished items back through its platform.

Historically, this gap in the market has been filled by specialist liquidators, who bought inventory and sold it through different middlemen who in turn passed it on to bricks-and-mortar discount stores. The rise of the internet has enabled individual re-sellers to play a role, using sites like eBay EBAY, +0.28%  to resell second-hand items they acquired, often at auction or from liquidators.

What we are seeing now is the rapid professionalization of this niche as re-commerce players step in to take over the roles of liquidator, middle man and discount retailer at a scale not seen before.

Leveraging technology, re-commerce companies have been able to crack the code on efficiently onboarding pallets of random goods, efficiently reconditioning and categorizing each item into their inventory system, and then rapidly listing each item on dozens of third-party marketplaces around the world for resale.

To maximize their revenues, re-commerce companies often use dynamic pricing engines that scrape the web to assess the optimal price for an item and then gradually drop the price until it sells.

The potential market for re-commerce is huge, extending well beyond clothes and shoes to the whole spectrum of consumer products. The total value of returns and overstock in the United States grew at an annual pace of 7.5% in 2017 to hit $554 billion. Post-retail footwear and apparel accounted for 6.4% of the total, or $35.4 billion. Footwear is a particularly exciting segment because of the rapid pace of its shift to online sales.

The rise of re-commerce is coming on the back of several important trends that promise to keep fueling demand for second-hand goods. The desire to be more environmentally sustainable, especially among millennial consumers, has made it more socially acceptable to use second-hand clothes and other old items.

The widespread online backlash against Burberry’s decision to burn $36.5 million worth of its clothes to stop them from flooding the market is another example of this shift in attitude. The increased value that consumers are placing on affordability in the post-financial crisis world is a trend that is going to continue to drive demand.

The excitement over re-commerce’s potential was clear this July when Optoro, a provider of returns-optimization software, closed a $75 million capital raise. And in June, B-Stock, one of the largest business-to-business marketplaces for returned, excess and other liquidation merchandise, announced a $65 million investment from Spectrum Equity, a leading growth-equity firm.

Other competitors in the field include Liquidation.com; Smart lots; Bay Rag Corp.; BHFO.com; The Jay Group; and Shoebacca.

The re-commerce industry is still developing but investors are starting to take an interest. Profit margins have the potential to be high, with big retailers offloading their returns to re-commerce players at less than 20 cents on the dollar.

And the industry needs capital because the key to success will be companies’ ability to scale by buying more inventory and leveraging technology in smart ways.

As with any rapidly evolving industry, there will be winners and losers, but those forward-thinking players are poised for strong growth in both revenues and profitability for years to come.