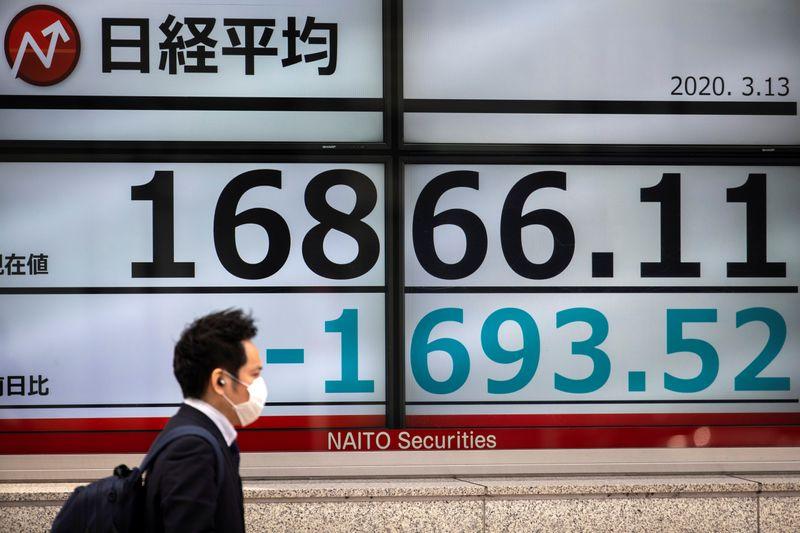 In Europe, the Euro STOXX 600 shrugged off data showing a bigger than expected fall in fourth quarter euro zone economic output to rally 0.5%.

Germany’s DAX leapt to its third record high in a week after a surprise rise in January exports.

The speedier rollout of COVID-19 vaccines in some countries and the United States’ planned $1.9 trillion stimulus package helped underpin a brighter global economic outlook, the Organisation for Economic Cooperation and Development said, as it raised its 2021 growth forecast to 5.6%.

“Conviction of a strong economic recovery is boosting risk sentiment and driving demand for riskier assets such as equities,” said Sophie Griffiths, an OANDA market analyst.

“Yesterday’s troubles of rising bond yields have been quashed, for now, and the U.S. dollar is slipping lower.”

Earlier, in volatile trading in Asia, China’s benchmark Shanghai Composite index fell 1.8% to the brink of correction territory amid fears of policy tightening. Japan’s Nikkei finished 1% higher as consumer goods companies and property developers gained on expectations they would benefit from an economic recovery.

Still, investors remain conflicted over whether the stimulus will help global growth rebound faster from the COVID-19 downturn or cause the world’s biggest economy to overheat and fuel inflation.

“The chance of our seeing more inflation in the economy is meaningfully increased by the monetary policy actions and the fiscal policy actions that we’re seeing around the world,” Goldman Sachs Chief Executive Officer David Solomon told a conference in Sydney via webcast.

“There is certainly a reasonable outcome where inflation accelerates more quickly than people are expecting, and that will obviously have an impact on markets and volatility.”

The technology sector and other richly valued companies have been highly susceptible to the rising rates.

U.S. economic data pointed to a continued recovery. Wholesale inventories increased in January despite a surge in sales, the Commerce Department said on Monday, suggesting inventory investment could again contribute to growth in the first quarter.

“If rates are grinding higher because people are getting optimistic about what economic growth looks like, that is still supportive for equity prices,” said Tom Hainlin, global investment strategist at U.S. Bank Wealth Management’s Ascent Private Wealth Group in Minneapolis.

Euro zone government bond yields fell across the board in the wake of the gloomy fourth quarter economic data.

U.S. Treasuries rallied ahead of a key auction, with 10-year yields dropping by as much as 5 basis points on the day.

In foreign exchange markets, the dollar index backed away from a three-and-a-half-month high and was 0.4% lower. In signs risk appetite might be returning, the British pound, the Aussie, and the Kiwi dollar all edged up. The euro rose half a percent to $1.19155.