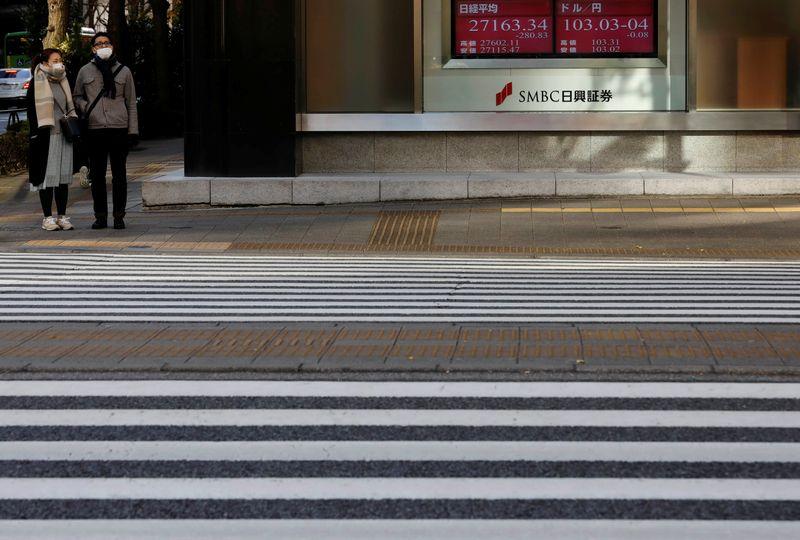 A late rally in Chinese shares on Friday helped pull Asian stocks off one-month lows as investors picked bargains while attention shifted to U.S. non-farm payrolls due later in the day.

E-Mini futures for S&P 500, which were down 0.5% during early Asian trading, gave up all losses by afternoon to be a shade higher.

Futures for Europe were pointing to a weaker start though, with those for Eurostoxx 50, Germany’s Dax and London’s FTSE down 0.3% to 0.6%.

In Asia, Australian stocks dropped more than 0.7%, Japan’s Nikkei share average shed 0.2%, after earlier being down more than 1%, and shares in Seoul fell 0.4%.

Chinese shares, which had opened in the red, reversed losses with the bluechip CSI300 index up 0.3%.

“China had a decent rally at the lows so that pulled markets higher. We saw a nice turnaround coming through,” said Chris Weston, Melbourne-based strategist for Pepperstone.

“We are seeing some strength come back. Energy, staples, utilities have done well and financials too as a hedge against rising rates.”

Earlier, equity investors were rattled by a sell-off in U.S. Treasuries which sent yields rising and hoisted the dollar to a three-month high, dragging the Japanese yen lower.

Energy markets were not spared the volatility either, with oil prices adding to big gains overnight after the Organization of Petroleum Exporting Countries (OPEC) and its allies agreed to mostly maintain their supply cuts in April as they await a more solid recovery in demand from the COVID-19 pandemic.

Investor focus turned to the release of the U.S. non-farm payrolls for February, with the market eyeing a bounce back in employment growth and a steady unemployment rate at 6.3%.

“We suspect the market will be inclined to look through a weaker number, with investors looking ahead to the big fiscal stimulus planned in the U.S. and the eventual removal of Covid-related restrictions later this year,” said Ray Attrill, head of forex strategy at National Australia Bank.

On Thursday, U.S. stocks slumped after Federal Reserve Chair Jerome Powell disappointed some investors by not indicating that the Fed might step up purchases of long-term bonds to hold down longer-term interest rates.

The tech-heavy Nasdaq Composite tumbled 2.1%, taking it down about 10% from its record close on Feb. 12 and putting it in correction territory.

Even though Powell made it clear that the Fed was not close to changing its ultra-loose monetary policy stance anytime soon, some analysts still worried rising Treasury yields could herald higher borrowing costs, thereby limiting the fragile U.S. economic recovery.

Bond investors sold U.S. debt. The yield on 10-year Treasuries climbed above 1.5% though it was still below a one-year high of 1.614% struck last week.

The yield curve, a measure of economic expectations, steepened on rising yields, with the gap between two- and 10-year yields widening by another 6.3 basis points overnight.

Rising Treasury yields bolstered demand for the dollar. The dollar index jumped to a three-month high of 91.734.

A stronger dollar hobbled the yen. By early Friday, the yen fell to as low as 108.11, the lowest since June 9.

The euro was also tripped by a firmer dollar, with the common currency sluggish at $1.1955.

Climbing yields and dollar strength pummeled gold prices, which sank to a nine-month low as investors sold the precious metal to reduce the opportunity cost of holding the non-yielding asset.