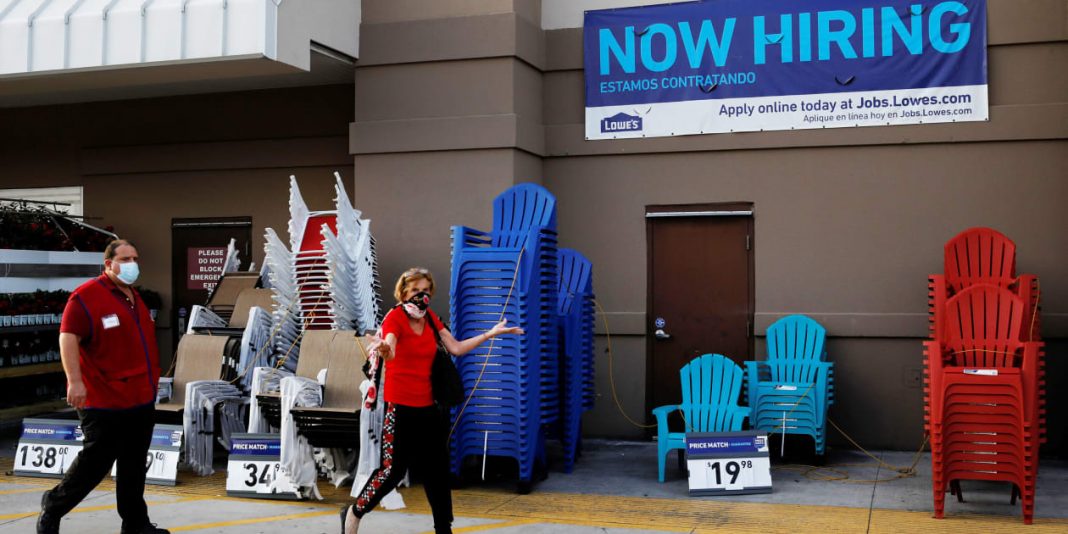 Employment growth was better than expected in October and the unemployment rate fell sharply even as the U.S. faces the challenge of surging coronavirus cases and the impact they could have on the nascent economic recovery.

The Labor Department reported Friday that nonfarm payrolls increased by 638,000 and the unemployment rate was at 6.9%. Economists surveyed by Dow Jones had been looking for a payroll gain of 530,000 and an unemployment rate of 7.7% a touch lower than the September level of 7.9%.

October’s gain was just slightly off the September pace of 672,000.

The jobless rate decline was positive as it came with a labor force participation rate that rose 0.3 percentage points to 61.7%. An alternative measure that includes discouraged workers and those holding part-time jobs for economic reasons also declined, to 12.1% from 12.8% a month ago.

The survey of households showed an even stronger level of job growth, with the total employment level rising by 2.24 million and the employment to population ratio increasing by 0.8 percentage points to 57.4%. The household survey also showed a decline of 1.52 million in the total unemployed level and a drop of 541,000 in those considered not in the labor force.

Those reporting that they had been out of work because their employer had lost business or closed during the pandemic also dropped considerably, falling to 15.1 million from 19.4 million in September.

Markets reacted somewhat positively to the news, with Dow futures erasing most of their earlier losses.

The biggest job gains came in the hardest-hit sector during the pandemic, as leisure and hospitality jumped by 271,000. Of that total, bars and restaurants increased 192,000.

“The strength of this report is really amazing in the face of rising coronavirus cases,” said Michael Arone, chief investment strategist at State Street Global Advisors. “You would have expected that to start to show up in the data, particularly in places like leisure and hospitality, where the numbers are incredibly strong.”

The report comes as the U.S. this week broke the 100,000-a-day barrier that pushed a rise in both hospitalizations and the death rate.

With Federal Reserve official stressing the link between the virus and economic growth, the U.S. faces challenging months ahead.

October’s growth brings the total payroll gains since May to around 12 million, though that still leaves unfilled about 10 million positions lost in March and April.

Construction also posted a healthy gain, up 84,000, while transportation and warehousing increased by 63,000 and manufacturing was up by 83,000, even though the sector remains well below its pre-pandemic level.

Pressured European officials are trying to drum up support for the...