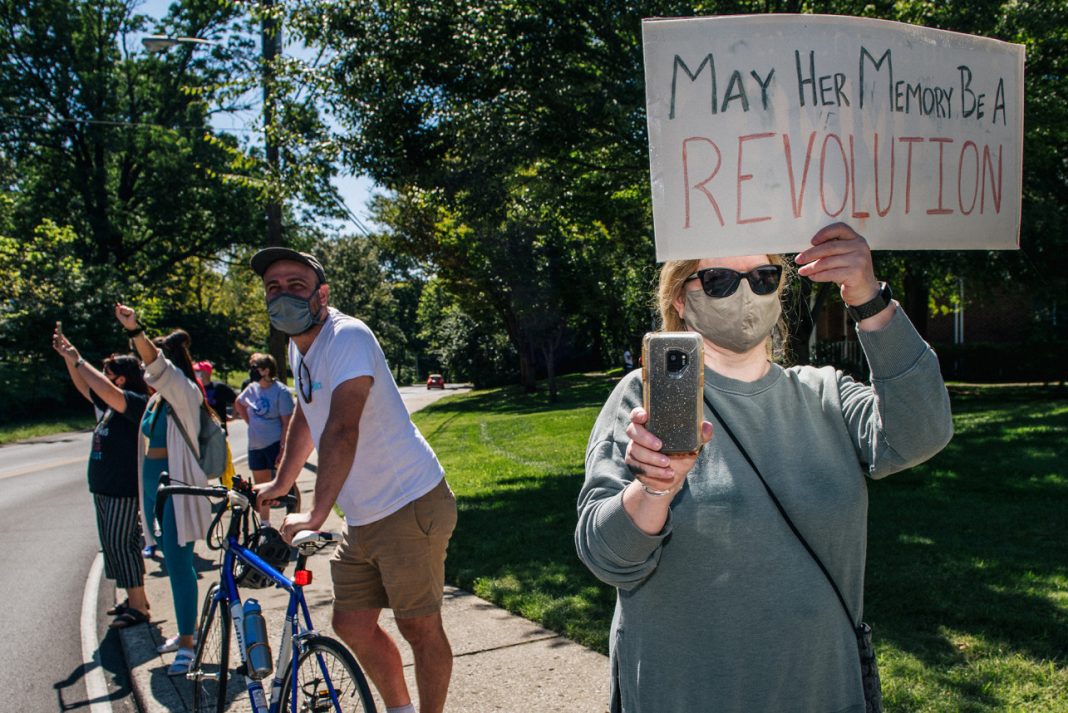 The mouth-frothing rage of Democrats over the possible filling of Ruth Bader Ginsburg’s seat on the Supreme Court before Inauguration Day is shocking, but predictable, after the “Summer of Love” we’ve endured.

Now they’re threatening to “burn it all down” if Republicans fill the vacancy soon.

Threats to kill Senate Majority Leader Mitch McConnell flooded Twitter, and dozens of police had to guard his Kentucky home as protesters descended on it.

It wasn’t just random psychopaths on social media threatening to “storm the White House and burn it to the f–king ground.”

“You dare try and replace her right now and there will be a war,” tweeted Hollywood actor Russ Tamblyn.

“F–k no. Burn it all down,” wrote parenting guide author Aaron Gouveia.

“If you can’t shut it down, burn it down,” wrote Scott Ross, a member of the Wisconsin Ethics Commission.

“Burn Congress down before letting Trump try to appoint anyone to SCOTUS,” wrote Emmett Macfarlane, an associate professor at Canada’s University of Waterloo.

“If McConnell jams someone through, which he will, there will be riots,” warned Washington Post freelancer Laura Bassett, “more, bigger riots.”

Yes, because there already are riots, arson, looting, assaults, intimidation and even murder from degenerate leftists using violence to get their own way.

But, as they have done all summer, instead of calling for calm, Democratic leaders encouraged the histrionics.

“Let this moment radicalize you,” Rep. Alexandria Ocasio-Cortez said in a social-media video, claiming democracy and the climate were at stake. “I need you to be ready . . . We can and must fight.”

Barack Obama hubristically declared that RBG had left “instructions” on her deathbed that Donald Trump not fill her Supreme Court slot.

Hillary Clinton urged a “fierce” response if he tried.

House Speaker Nancy Pelosi on Sunday refused to rule out impeachment to stop Trump getting his third Supreme Court justice.

“We have our options. We have arrows in our quiver that I’m not about to discuss right now,” she told ABC’s George Stephanopoulos when he suggested impeachment.

If anything, Biden was even more hyperbolic Sunday.

He drove 40 minutes from his basement to a hall in Philadelphia to read a rabble-rousing speech off a teleprompter.

Like Obama, he demanded the Senate heed RBG’s purported deathbed wish and warned of “action and reaction. Anger and more anger.

“That’s the cycle that Republican senators will continue to perpetuate if they go down this dangerous path . . . a constitutional crisis that plunges us deeper into the abyss . . . irreversible damage.

“The infection this president has unleashed on our democracy can be fatal.”

He warned that “voters . . . will not stand for this abuse of power,” and then had the nerve to say: “This nation needs to come together.”

We’ll overlook his claim that “200 million people have died probably by the time I have finished this talk from complications of COVID-19.”

But there’s no ignoring this laughable statement: “We can’t keep rewriting history, scrambling norms and ignoring our cherished system of checks and balances.”

He probably hasn’t noticed, but the only people “rewriting history” are Democrats and their supporters — the 1619 Project, anyone?

As for scrambling norms, Democrats repeatedly say they want to stack the Supreme Court with more liberal justices to dilute the influence of Republican-appointed originalists. So, instead of nine justices on the bench as has been the norm since 1868, they would increase the head count to 15. This was a major topic in the New Hampshire primary.

They also talk about abolishing the Electoral College, granting statehood to Puerto Rico and Washington, DC, and dividing California into three states, to entrench their power indefinitely.

That’s not scrambling norms, it’s smashing them with a sledgehammer.

Supreme Court confirmations used to be based on merit. That changed when Biden became chair of the Senate Judiciary Committee.

He presided over the smear of Justice Robert Bork in 1987 and the “high-tech lynching” of Justice Clarence Thomas in 1991, and joined the destructive campaign against Justice Brett Kavanaugh.

It was Democrats who turned judicial nominations into the “Hunger Games.” The Heritage Foundation found Trump nominees received 20 times the opposition of pre-Trump nominees, despite the fact the American Bar Association rated them comparably to their predecessors.

Another norm was smashed by Democrats in 2013 when then-Majority Leader Harry Reid took the “nuclear option” to abolish the filibuster for nominations, which ultimately led to the current situation in which Senate Republicans need only a simple majority to confirm RBG’s successor.

So, please, no lectures on “scrambling norms.”

Inciting violence, smashing norms, refusing to accept the results of the 2016 election — this bad behavior has led to the Democrats’ predicament.

They are terrified they can’t win the election and Obama’s progressive agenda will be wiped away for a generation.

Too bad. “Fill that seat” was the enthusiastic chant at Trump’s Saturday night rally in North Carolina and the president is hardly one to shirk a fight.

He will nominate a woman and McConnell will decide whether to confirm her before the election or in December, for maximum electioneering advantage.

Democrats will have to decide how demonizing a female nominee, Kavanaugh-style, will play with the “suburban woman” demographic. All their ugly tantrums have achieved on election eve is the contempt of sentient Americans.

Never has a virtue signaler been more expertly skewered than the president of Princeton.

Earlier this month, Christopher Eisgruber gratuitously confessed in an open letter that Princeton was plagued by “institutional racism.”

“Racist assumptions . . . remain embedded in structures of the University,” he wrote. “Anti-Black racism has a visible bearing upon Princeton’s campus makeup and its hiring practices.”

Last week, the federal Department of Education wrote to Eisgruber, saying that “based on its admitted racism,” Princeton had violated the US Race Discrimination Act and would have to repay $75 million of federal funding, pending a formal investigation.

Talk about being hoist by their own petard. Give Betsy DeVos a medal.

The latest post-COVID menace in Manhattan is dirt bikers screaming through the streets in midnight drag races, popping wheelies and driving everyone insane. Make it stop.