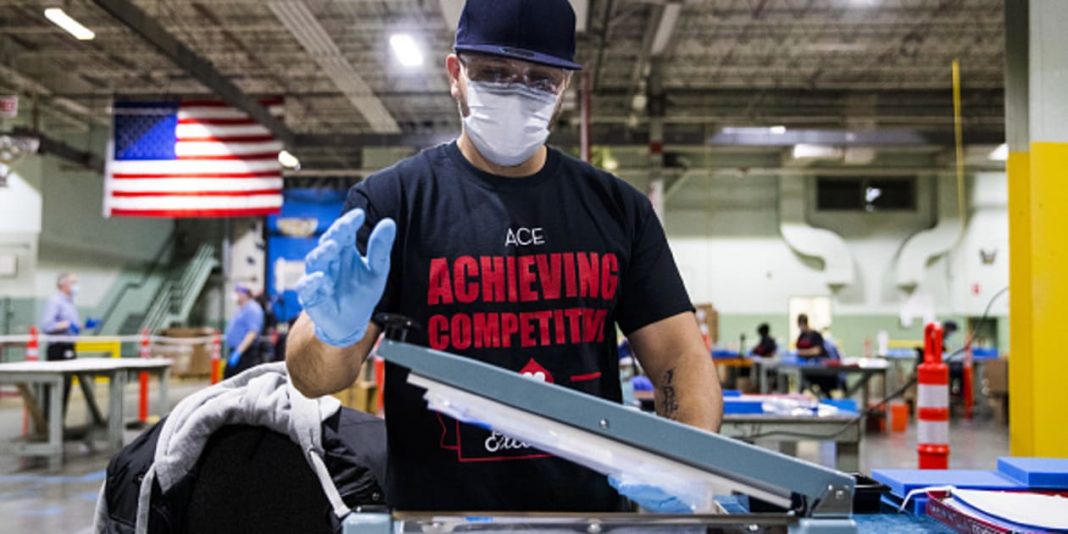 Nonfarm payrolls increased by 1.37 million in August and the unemployment rate tumbled to 8.4% as the U.S. economy continued to climb its way out of the pandemic downturn.

The unemployment rate was by far the lowest since the coronavirus shutdown in March, according to Labor Department figures released Friday. An alternative measure that includes discouraged workers and those holding part-time jobs for economic reasons also fell, down to 14.2% from 16.5% in July and 22.8% at the peak in April.

Economists surveyed by Dow Jones had been expecting growth of 1.32 million and the jobless rate to decline to 9.8% from 10.2% in July.

“It’s another great day for American jobs and American workers,” Vice President Mike Pence told CNBC. Pence added that the job growth and the single-digit unemployment rate is “real evidence that the American comeback is underway.”

Markets initially reacted positively to the news, but stocks turned lower and continued the aggressive sell-off from Thursday..

“We are still moving in the right direction and the pace of the jobs recovery seems to have picked up, but it still looks like it will take a while – and likely a vaccine – before we get back close to where we were at the beginning of this year,” said Tony Bedikian, head of global markets at Citizens Bank. “We continue to be optimistic that the economy has turned a corner and that we’ll continue to see steady progress.”

Government hiring helped boost the total, with the growth of 344,000 workers accounting for a quarter of the monthly gain. Most of that hiring came from Census workers, whose rolls increased by 328,000. Despite worries of a revenue crunch among at the municipal level, local government employment rose by 95,000.

The total of those on furlough also fell dramatically. There were 24.2 million people who said they not working because their employer either closed or lost business due to the pandemic, down from 31.3 million in July.

Those on temporary layoff also declined, falling by one-third to 6.2 million and well off the high of 18.1 million in April. However, permanent job losses also jumped, rising by 534,000 to 3.4 million. Laid-off workers who returned to jobs also fell by 263,000 to 2.1 million.

The Labor Department’s household survey indicated employment growth of 3.8 million and a decrease of 2.8 million on the unemployment rolls. That left employment down 11.5 million from pre-pandemic levels.

“Employment growth is still set to lag the recovery in broader economic activity over the coming months given its greater exposure to the services sectors worst affected by the pandemic,” wrote Andrew Hunter, senior U.S. economist at Capital Economics. “Nevertheless, the August data illustrate that, despite the earlier surge in virus cases and more recent fading of fiscal support, the recovery continues to plow on.”

Other big job gains came from retail, which added 249,000 positions, while professional and business services rose by 197,000 and leisure and hospitality, the hardest-hit sector during the pandemic, saw a gain of 174,000, most coming in bars and restaurants.

Education and health services also showed strong gains, at 147,000, while transportation rose by 78,000 due to a big gain in warehousing and storage jobs. Financial activities increased by 36,000 while manufacturing increased by 29,000 and wholesale trade was up by 14,000.

Average hourly earnings rose 4.7% from a year ago, though comparisons are difficult due to compositional effects from the pandemic.

The report comes amid a raft of mostly positive economic signals, with retail sales, real estate and manufacturing showing sharp rebounds off their coronavirus lows. Still, economists worry that absent another round of stimulus from Congress, the boosts in activity could be short-lived.

“These jobs numbers reflect a big win for American workers, and are a welcome surprise considering the unemployment insurance claims have barely been budging in recent weeks. Unemployment breaking the 10% barrier so decisively is a big psychological lift as well,” said Robert Frick, corporate economist at Navy Federal Credit Union.