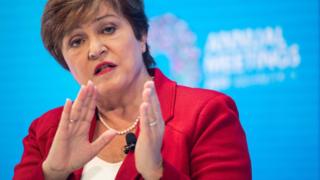 The global economy is growing at its slowest pace since the financial crisis, the International Monetary Fund (IMF) has said.
The fund said world growth would hit just 3% this year – down from its July forecast of 3.2% and a sharp slowdown from just two years ago.
The IMF blamed the slowdown on trade fights, Brexit uncertainty and other geopolitical crises.
It added there is an “urgent” need for leaders to de-escalate the tensions.
“The global outlook remains precarious,” the international lending body said in its annual report. “At 3% growth, there is no room for policy mistakes.”
Global downgrade
The IMF, which downgraded its forecasts for most of the world, predicted that growth in advanced economies would slow from 2.3% in 2018 to 1.7% this year.
In the US, where an economic boost from a 2017 tax cut has faded, the fund expects growth to pull back from 2.9% last year to 2.4% in 2019.
In the UK, where Brexit-related worries have hurt investment, growth is forecast at 1.2% for 2019, down from 1.4% last year.

In Germany, which is reeling from a downturn in car production, growth is predicted at 0.5%, down from 1.5% in 2018.
China’s economic growth is expected to slow from 6.6% to 6.1%. It has been hit by efforts to rein in risky debt and the trade war with the US, which led the IMF to shave almost a percentage point off global growth.
Thus far, the IMF said central banks have managed to blunt the impact of the slowdown with tools such as low interest rates. Without those stimulus policies, it estimates that the growth rate would have been 0.5 percentage points lower this year.
“With central banks having to spend limited ammunition to offset policy mistakes, they may have little left when the economy is in a tougher spot,” the fund said.
Downside risks
The World Trade Organization also recently downgraded its economic outlook, citing trade wars, Brexit and other factors.
The IMF said the global economy could grow faster in 2020, at 3.4%. However, it warned that risks are “skewed to the downside”, noting that the pickup depends on improvements in India, as well as several economies currently under severe strain, such as Argentina, Turkey and Iran.
“Policy missteps at this juncture, such as a no-deal Brexit or a further deepening of trade disputes, could severely undermine sentiment, growth, and job creation,” it said. “The foremost priority, in many cases, is to remove policy-induced uncertainty or threats to growth.”
What can policymakers do to tackle the global economic slowdown? The commentary from the IMF’s chief economist, Gita Gopinath, has something to say about three major policy tools.
Trade policy is the obvious one. The IMF blames much of the weakening outlook on trade tensions so you would expect a call to reverse the tariff increases imposed by several countries, notably the US.
That does indeed top Ms Gopinath’s list. Central banks have already taken steps – interest rate cuts and other measures. She describes these moves as spending limited ammunition to offset policy mistakes.
She warns that central banks may have little left when the economy is in a tougher spot. It’s a worry that has been bubbling for several years before the recent escalation of trade tensions as central banks reached for new ideas in the aftermath of the global financial crisis.
Ms Gopinath argues this cannot be the “only game in town”. Governments that can afford it – she mentions Germany, in particular – should cut taxes or increase spending. And she says if things get worse, an internationally co-ordinated response along these lines might be required.